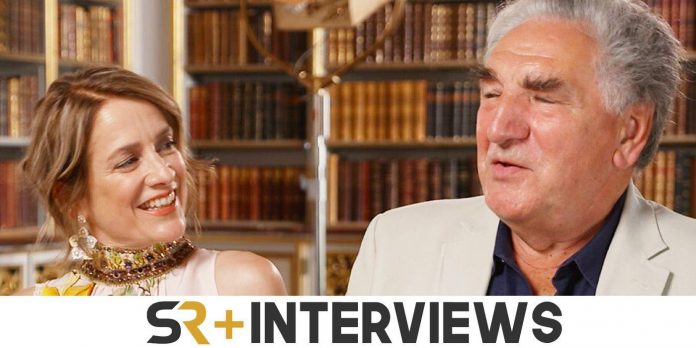 The long-awaited Downton Abbey: A New Era sees the family and staff of Downton thrown into new worlds, with stories coming full circle, and new beginning opening up. Inevitably, the challenge of new dynamics – of heading out to the South of France and of Hollywood invading Downton with all of its vulgarity and perceived disrespect – is felt most by the traditionalists. And they don’t come much more traditional than Jim Carter’s Mr. Carson.

Both Mr. Carson and Raquel Cassidy’s Miss Baxter face down new adventures together, heading to the South of France in search of answers to Lady Violet’s latest mystery. And on top of the sartorial challenges Downton Abbey’s famous butler discovers, there are significant others to face to as Downton reckons with the loss of a very important figure. Not all change is bad, though, as Miss Baxter finally gets her happy ending and Carson’s future once more brings him back into the fold.

Ahead of Downton Abbey: A New Era’s release on DVD and Blu-ray on July 5, Screen Rant spoke to stars Jim Carter and Raquel Cassidy about the Downton family heading to France, that proposal, and an idea for Downton Abbey 3…

Screen Rant: I’m sure you’ve been asked already, but what was your favorite memory of making A New Era?

Jim Carter: Well, I’m afraid this is an answer that might have been given before. The trip to the South of France. It’s got to be, hasn’t it? In context, we were filming a year ago [when] lockdown restrictions were still in place – more strictly in France than England. There was a contingency plan that if we hadn’t been able to travel to France, we’d have filmed the South of France stuff in Scotland, which is charming in many ways, but hardly Mediterranean. So, there [was a] sigh of relief as we got onto the plane to go to France was.

Raquel Cassidy: Literally, it was touch and go right until we went, wasn’t it? Because I think that we got the green light, but then it was like, “It still might not happen.” So, the relief and the joy of going on a charter plane. We were like children, really.

Jim Carter: We had a week lockdown in a hotel with a swimming pool. Wasn’t that hell? [Laughs] “Please, guys, try not to get too much suntan.” Yeah, okay.

Raquel Cassidy: You were rubbish at that. [Laughs]

Jim Carter: And then two weeks filming in a villa handpicked for its beauty with a great location. So, it was no hardship.

Raquel Cassidy: It was the icing on the cake.

My favorite parts of the movie tend to balance comedy and more personal moments. The hat shop is hilarious, but it’s also where you see some vulnerability in Mr. Carson, which is very rare. And of course, the proposal scene (between Mr Molesley and Miss Baxter). They’re both the best. What was it like to film both of those scenes?

Raquel Cassidy: Quite different. There’s a lot riding on the proposal scene, because so many things happen in that very short scene. It’s the kind of thing she’s been waiting for for such a long time, but then in the moment she meets him, they’re dressed up and she thinks he’s nervous for a different reason. Then he suddenly says all his dreams came true, and she’s like, “Oh, no, I must have misread this.” It’s like this for her, and then he goes, “Do you want to do it?” and she’s like, “Kneel down!” It was an absolute gift of a scene and, at the same time, you want to really make sure you do it justice. There’s the joy of doing it, with the, “Please don’t let me f–k it up.”

Jim Cater: Plus, you were put in an extravagant costume to do it.

Raquel Cassidy: Yeah, I couldn’t breathe in it.

Jim Carter: The hat shop scene with Imelda [Staunton] was fantastic, because we’d worked before, and then she was the first film but we never had any scenes together. So, to just have that cheeky little scene with the reference to married was cheeky and nice and fun. I very rarely go shopping for clothes, but she’s never called me King Zog when we’re shopping for clothes yet. So, that was a first. It was a cinematic first.

It was also great just to see Baxter and Molesley get their very well-earned happy ending. You spoke about it taking a long time. Did you ever want them to get together before that point?

Raquel Cassidy: Oh, yeah. I did very much. For her, for all the fans, and just because she wants it so so much. But it was like the movement of a glaciers, and that was kind of frustrating. However, all good things come to those who wait, and Julian didn’t disappoint having us in those costumes. And I think he counterbalances it, because the moment that Molesley hears that he can actually offer her a life, he finds her. He doesn’t do anything else, and he’s got a film to film that he’s written. So, I love the juxtaposition of that. It was genius, really.

What do you think the life will be like together?

Raquel Cassidy: Happily ever after. I truly believe that, I think they’ll be very, very happy together.

Jim Carter: There won’t be a conflict between them if he’s offered work in America, goes to the film industry to America, and then starts the Hollywood Cricket Club? Which started in 1932 with lots of English actors. Oh, there’s a new film! Yeah.

Raquel Cassidy: I don’t think there’ll be a conflict. I think, one, they’re quite used to being apart. I think she’s quite independent, and has always had to be. I think they’ll work it out. And also, he’s gonna be stinking rich. He can just fly her over when he wants to.

Raquel Cassidy: Yeah, if you think you’re gonna come back into Downton Abbey in an American roadster, flashing your dollars around? Forget it. That is a great pitch for a film.

One of my favorite moments is very small thing. It’s a Carson moment, and it’s in the fan-service moment of the entire movie. It was the bowtie being the only thing that he allowed himself to get into. Was that your doing?

Jim Carter: When we became parts of the film? I sort of said, “Well, Carson certainly would draw the line at wearing false whiskers and having any of that silly nonsense put on him.” So, as my costume is practically a period costume anyway, it was just a change of the bowtie. He was still very reluctant to join in all the fun, until he was told that he was going to be playing Lord Somebody-or-other. “Well, in that case… Well, that makes sense. Of course, perfect casting.”

And, actually, we had such good fun doing that. Because none of us; none of the servants have ever sat down in that dining room. And for some of the servants – I mean, it’s only in this film that Raquel came into the dining room ever, and Mrs. Patmore and Daisy have hardly ever been in there. And to be sitting down and playing lords and ladies, and then the real lords and ladies came in and were extras, and had to tiptoe around to the back? We all had a very giddy time doing that.

Raquel Cassidy: It’s a great memory. In terms of scenes being filmed, that’s probably the high point, because we were all together as well. We weren’t together that much in the filming.

Jim Carter: No, no, because we were sort of continents apart. I don’t think it made it into the film, but there was a bit when the Dominic West and Laura Haddock came back in having done their scene. And we were clapping, “Very good acting! Good acting, very good.” And I don’t think that made it in. Good fun.

Raquel Cassidy: But you were the best actor around that table.

Jim Carter: Of course, darling. That goes without saying, shush.

Raquel Cassidy: Yeah, but Carson really gets into it, doesn’t he? I love it. Because I don’t know if he actually is acting at that point.

The much-anticipated cinematic return of Downton Abbey follows the Crawleys and their staff as they welcome a movie crew and their glamorous stars to Downton for the filming of a new silent movie, while other members of the family go on a grand adventure to a villa in the south of France to uncover a mystery about the Dowager Countess and her past.

FIFA 22 Welcomes The Mascots Of Some Teams: All The Details