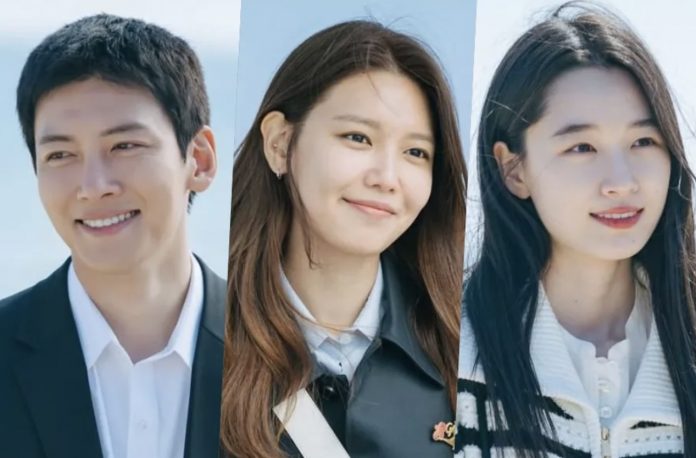 Ji Chang Wook, Suyoung from Girls’ Generation and Won Ji Ahn shared their final comments on “If You Wish Upon Me”!

“If You Wish Me” on KBS 2TV is a drama inspired by a real organization in the Netherlands that fulfills the wishes of terminally ill cancer patients. The finale aired on September 29, and its rating slightly increased compared to the penultimate episode.

Ji Chang Wook plays Yoon Kyo Rae, a man pushed to the limit by a difficult life full of struggle. However, when he has to work as a volunteer in a hospice, his life suddenly changes, helping to fulfill the wishes of patients.

Suyoung stars in the drama as Seo Yeon-joo, a tough and cheerful hospice nurse obsessed with exercise, and Song Dong-il plays Kang Tae-shik, the volunteer leader of Team Genie. Won Ji Ahn plays Ha Joon Kyung, the human incarnation of a black swan who becomes obsessed with Yoon Kyo Rae after giving her a helping hand for the first time in her life.

To console viewers who have already missed the drama, Ji Chang Wook, Suyoung and Won Ji Ahn shared sincere closing comments. Ji Chang Wook noticed: “If you Wish Me”, the filming of which began last fall, finally aired its last broadcast. I often remember moments with our team members on the set. I am very lucky to be able to be Yoon Kyo Rae and work with many wonderful people.”

He added: “If You Wish Upon Me” has become a new challenge and experience for me. I hope that the moment of comfort and warmth was conveyed to [viewers] through Yoon Kyo Rae’s growing up and the story of “If You Wish Me.” Besides, I hope it will remain a story that you think about from time to time.”

Suen shared, “This project was incredibly healing [for me] during filming and while watching the broadcasts, I was constantly reminded of funny memories from filming, so I thought about how happy I was and that I missed it. I hope that the touching emotions that I experienced during the filming were passed on to the audience.”

She also commented, “Like Chief Kang Tae Shik’s ambulance, I hope this will become a drama that will be remembered for a long time and firmly established in the hearts of viewers. Although ambulances have to move fast, Tae Shik’s ambulance moves slowly, but it does its part of the job. I believe that “If You Wish Me” was a drama similar to Tae Shik’s ambulance, which is firmly coming to an end. Thanks to the viewers who were with us until the end.”

As for her character Seo Yong Joo, Suyoung remarked: “Although Yeon Joo was an icon of cheerfulness in the hospital, I think she was also a character who gave vitality to the drama itself. That’s why during filming, every time Yong Joo appeared, I felt a responsibility to air out [the scene] and add vitality to the drama. Even for the scenes I just went through, I worked on set to make them a little more fun and energetic. I think the aspects that I paid attention to helped a little bit, so I’m proud.”

Thanking the audience, Suen added: “There is a message in every episode of our drama. I hope it becomes a drama that you discover from time to time and are reminded of.”

Won Ji Ahn commented: “I am grateful that I was able to greet you with the song “If You Wish Upon Me”. I think that the time I spent with our employees, as well as with Song Danil, Ji Chang Wook and Choi Suyoung, will remain as a valuable experience. Many thanks to everyone who laughed and cried with Jun Kyung until the very end.”