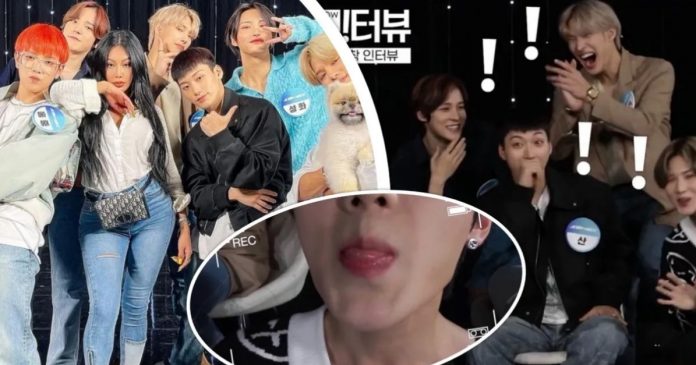 ATEEZ idols were guests on Jessi’s show having fun and showing off their hidden skills. Jessi discovered a very interesting hidden talent of ATEEZ idols, do you know what hidden abilities it is? ATINY can’t stop thinking about the uses it can be put to.

ATEEZ is promoting their most recent production ‘ZERO: FEVER Part.3’ with which they are already triumphing everywhere because the album had very good pre-sale sales and also gave them their debut on the Billboard 200 , one of the most important charts in the world. of the music industry .

Because of this, the idols turned to Jessi , a very popular interviewer from South Korea who has a very unique and fun way of doing dynamics with her guests; her program ‘Jessi’s Show! Terview’ is widely seen thanks to the charisma of the host .

So on Jessi’s show with ATEEZ we got to have fun and get to know more idols who have a hidden and special talent that put them a bit in trouble thanks to a question Jessi asked them.

JESSI DISCOVERS THAT ATEEZ IDOLS HAVE HIDDEN LANGUAGE SKILLS, WHAT DO THEY USE THEM FOR?

Jessi prepared a great program to receive ATEEZ for the first time on her set, while there we saw them have fun dynamics with the host and at some point she questioned them about their hidden talent, Yeosang was the first to answer since he can turn his tongue 180 ° and showed it to the camera.

To which Jessi asked, ‘What use can you make of that?’ The band members started laughing but Jessi didn’t stop there and asked the idol if he had a girlfriend, something that made the idols surprised and laughed even louder: 0 … Although he was not the only one with skills with your language in ATEEZ.

Jessi was dying to have this K-Pop group on her show and she did it, here you can watch the episode and know the language talents of all the ATEEZ idols .

Wow, Yeosang just wanted to demonstrate his hidden talent in an innocent way and he ended up blushing … Anyway, it was a very funny interview and the idols were very comfortable with the host; Jessi never fails and is so cool.