Home Entertainment Jessi and Hyuna: Why Their Performances Always Cause a Stir 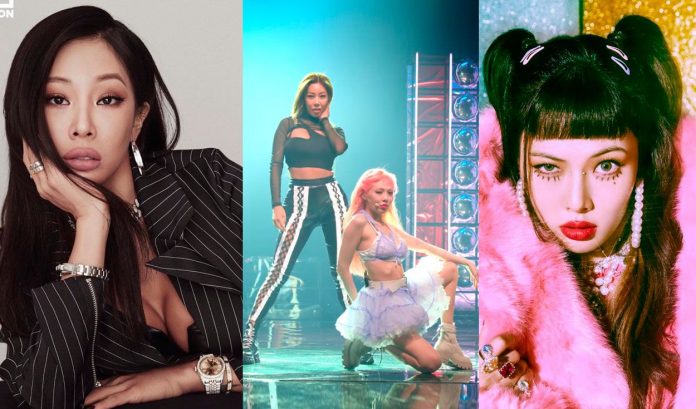 Why Jessi and Hyuna’s performances always cause a stir. They appeared on Music Bank and became a trend. Jessi and Hyuna are the most admired and loved K-pop idols in the industry.

Heroes vs. villains’ was the theme that KBS’s Music Bank presented on June 15 and as part of the line-up, there was a performance by Jessi and Hyuna, both from P Nation. As expected, they caused a stir on social networks.

In between their scheduled performances, the singers performed a dance solo true to their style. Jessi came out sporting a black latex outfit (following the villain theme), while Hyuna in light colors as a heroine.

The first to show up was the performer of “Not cool” and she was joined by her partner in an energetic choreography, which Korean audiences are not used to seeing every day.

The video was uploaded to YouTube and added thousands of views, not only in the version seen on TV but also the one that showed all the choreography.

They also had their individual presentations.

But why do Jessi and Hyuna cause such a stir every time they step on stage?

It is not an easy question to answer, but we will try to be as concise as possible.

Hyuna debuted in Wonder Girls but left the group due to health issues. Her time in the JYP Entertainment group did not have as much notoriety.

Until in 2009, the singer appeared as one of the most visual members of 4MINUTE belonging to Cube Entertainment.

Her position in the group was as the group’s lead dancer and rapper, and she began to gain attention.

All the spotlight was on Hyuna when she debuted as a solo artist, as she showed a unique version of her, far removed from the sweet and cuddly girl that was all the rage in K-pop girl groups.

After being classified as a “sexy bomb”, the singer began to suffer harsh comments from Koreans, who began to criticize her way of singing to the clothing she wore.

Although Hyuna said that she was initially affected by the malicious comments, she did not stop being her and showing herself as she is.

A similar case is that of Jessi, who has the profile of an American rapper of the stature of Nicki Minaj or Cardi B, who made her way into the world of K-pop since 2005.

Her style, in the beginning, did not attract attention in South Korea, so in 2009 she decided to return to the United States.

In 2014, she resumed her career becoming one of the most imposing rappers in the K-pop industry.

Although her songs became popular like “Can you hear me” or ” Gucci “, some media had to censor part of her MV for daring poses.

Like Hyuna, the ultra-conservative sector of South Korea questioned the profile that Jessi portrayed as artists, but ignored the criticism and moved on.

Jessi and Hyuna have become artists who little by little are breaking stereotypes and stigmas as female singers in a country that still keeps the macho image alive in its society.

The showrunner of Strange New Worlds explains the reference to the...