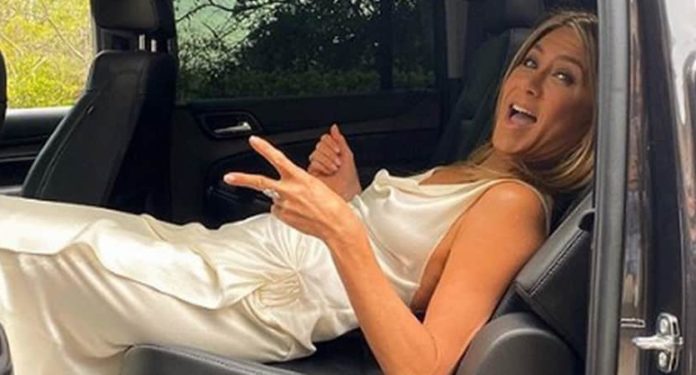 According to a specialist in romantic relationships, Jennifer Aniston would do everything to make Brad Pitt jealous of the men who approach him.

Jennifer Aniston would have mourned her past relationship with Brad Pitt? Nothing is less sure ! In any case that’s what a love coach says .

During the Oscars, Jennifer Aniston and Brad Pitt attracted everyone’s attention! Indeed, all the paparazzi and journalists hoped for a love parade between the ex-lovebirds . Unfortunately, the two stars did not walk the red carpet together. But may their fans be reassured! Jen and Brad also partied during the event’s after-party!

According to revelations at SUN, Jennifer Aniston did not ignore her ex-husband Brad Pitt. On the contrary … But the pretty blonde remained glued to Jon Hamm . The actor is known for playing in the hit series “Mad Men”. “Jen and Jon chatted for a very long time and seemed to know each other very well. Everyone has noticed, ” said an anonymous source.

For Lara Asprey, Jennifer Aniston did not want to seduce Jon Hamm . The love coach also explained to Express UK: “When your ex is Brad Pitt, it’s hard for her to be jealous because it’s Brad Pitt. But Jen is also beautiful and I think she wanted to make him jealous, ” said Lara Asprey. And to add: “She greeted him but spent all his evening talking with Jon Hamm, they get along very well and have known each other for years” .

Jennifer Aniston she would like to win back Brad Pitt? At this stage, everything is possible according to Lara Asprey! “I think she wanted to show Brad that she was having a good time . Do you know that moment when you’re with your friends and you see a cute guy, and you laugh to show that you’re having fun? I have the feeling that it is the impression that Jen wanted to give, that she was having fun and she wanted Brad to notice it, ” concluded the love coach. To be continued !

Meghan Markle: a photo of her adolescence resurfaces!