Home Celebrity Jennifer Aniston causes a stir in the networks for a shameful moment... 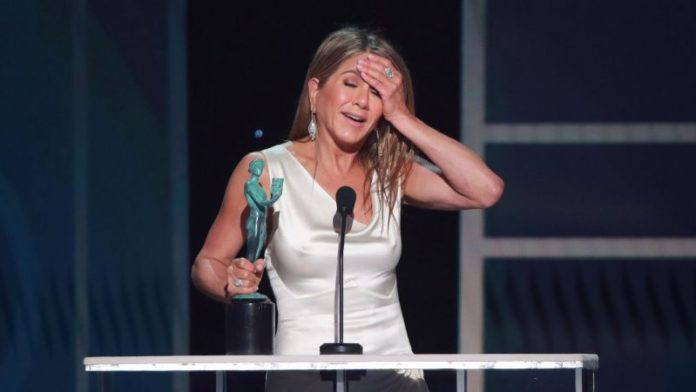 The Hollywood actress returned to speak after revealing the shameful situation that happened with a man.

Again we are talking about one of the best known, most beautiful and friendly actresses in Hollywood, one of the few who despite having reached 50 years of age, still looks fantastic.

We refer to Jennifer Aniston, who once again has given to talk on social networks, after surprising her fans by revealing a daring secret of her past.

The truth is that since the actress decided to join the world of networks, more precisely to Instagram, in a very short time she has become one of the biggest influencers on the web.

No wrinkles… harder than it looks! Somewhere between these two photos, my peers gave me a gift I will cherish and a night I will never forget. Thank you @sagawards, @themorningshow, and our incredible cast and crew. Let’s get back to work!

Jennifer , despite being one of the few celebrities who does not share high-flying photographs, the power she has to attract the attention of Internet users is impressive.

As it happened now, they have relived an embarrassing moment from Aniston’s past . Some years ago, Brad Pitt’s ex was interviewed by Ellen Degeneres on her show, and there she revealed the intimate experience she lived.

For the also film producer , confessed that he had sex in one of the hottest and most peculiar places. She began to follow the game of the dynamics that the presenter handled, and little by little she was revealing that she had an intimate encounter on a plane.

And as if that were not enough, the Daily Mail website published a video where Jennifer is observed next to the pilot and the copilot of the plane, the clip left many intrigued, however, the protagonist has not mentioned anything about it. However, some network users drew their own conclusions that perhaps the famous one was with Brad Pitt or with Justin Theroux.