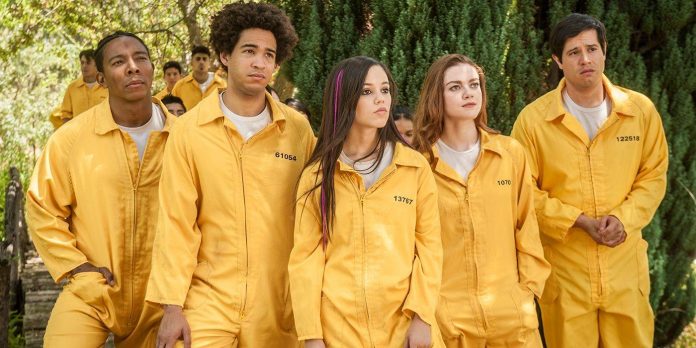 Screen Rant can exclusively present an excerpt from the new comedy-thriller “American Massacre”, which will appear in theaters, as well as on demand and in digital format on July 15 from Saban Films. The new film directed by Diego Hallivis (producer of “The Devil Below”) and written by him and his brother Julio Hallivis in collaboration with his brother Julio Hallivis is a fantastic look at the all-too-real brutality of the separation camps that have recently alienated Latin American families from each other. Another.

In a world where the governor of a state issues a decree on the arrest of undocumented immigrant children, a group of teenagers in captivity is given a chance to clear themselves of imaginary charges in exchange for work in an elderly care facility. Although the deal seems too good to turn down, things take a turn for the weirder and worse when the group realizes that the warden at their new location is plotting something terrible with the governor, and no one at the facility is safe.

In an exclusive Screen Rant video provided by Saban Films, Camila (Jenna Ortega, who became the star of the most recent “Scream”) tells how she can no longer remember what happened after she and her friends spent time in the pool. Not only does she overheat only in a bathrobe, she has a strange and ugly mark on her neck, as if she was put to sleep with a needle. Watch a clip from American Carnage by watching the embedded video below or by clicking on the link:

Although teenagers cannot fully remember what was done to them, it is important that they are fully aware that something was done. Armed with this knowledge, I hope they will be able to unite and fight back before it’s too late. A newly released trailer shows how the children were initially taken away and dragged into a plan that led to a nursing home. While this naturally doesn’t reveal the conclusion, “American Massacre” clearly hopes to shed light on how the most vulnerable in society are often treated.

In 2022, Saban Films made a splash with its selection of thrillers, detective stories and intelligent horror films. Starting with “The Legend of La Llorona” in January, Saban’s other releases this year include a psychological thriller Chariot, a spy drama Agent’s game, action movie No “Saints,” the sci-fi horror film “Cryo,” and the political dystopia “Deep in the Woods.” “American Massacre,” which will be released later this month, has a duration of 100 minutes and an R rating.