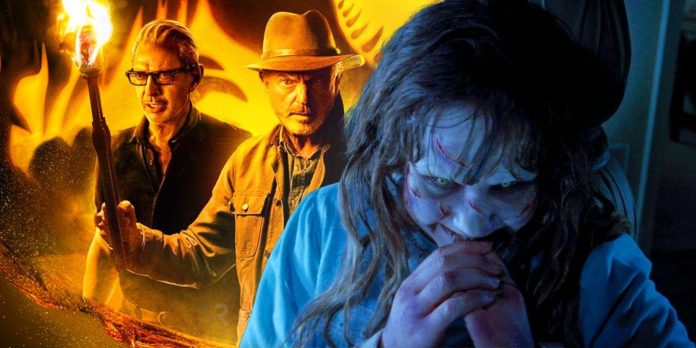 Jeff Goldblum compares his return as Ian Malcolm in Jurassic World: Dominion to The Exorcist. Goldblum had already made a name for himself by the time Jurassic Park was released in 1994, primarily thanks to David Cronenberg’s The Fly, but the role of Ian Malcolm is perhaps his most popular role to date. Malcolm was one of the three main characters in Steven Spielberg’s first film from the Jurassic Park trilogy, along with Alan Grant played by Sam Neal and Ellie Sattler played by Laura Dern. Goldblum also directed A lost world whose story revolved around his journey to John Hammond’s second Jurassic Park to save his girlfriend.

After Jurassic Park 3 was released in 2001, Jurassic Park 4 was stuck in development hell for many years. 14 years later, in 2015, a relaunch/sequel of “Jurassic World” with Chris Pratt and Bryce Dallas Howard in the lead roles was released. The film and its sequel, Jurassic World: Fallen Kingdom, did not receive the same critical acclaim as the original Jurassic Park, in part because Malcolm, Alan and Ellie were not involved in the story. Goldblum had a small cameo role in the first sequel to Jurassic World, and is set to star in Jurassic World: Dominion alongside Neil and Dern, which will be their first collaboration in almost 30 years.

In a recent interview with The New York Times, Goldblum explained that he first met Trevorrow while filming a Jeep Super Bowl commercial, where he recreates the iconic “Gotta Go Faster” scene from Jurassic Park. Goldblum says Trevorrow approached him at the artisans table to tell him to be ready to return for another sequel, as “Jurassic World: Dominion” planned to include Malcolm, Alan and Ellie. Goldblum jokingly compared the interaction to the scene in “The Exorcist” when Max von Sydow’s father Merrin is asked to perform another exorcism. Check out his full comment below:

I was doing a Super Bowl commercial with Colin Trevorrow, and that was the first time I met him. We were sitting at the artisans’ table, and he said, “Be ready: We’re going to make another one of these “World” movies, and I think we’re going to ask you to do something in it with Sam and Laura. It was like that scene in The Exorcist when someone approaches Max von Sydow and gives him a note that says: “You have been called to perform another exorcism.”

The return of the iconic trio from Jurassic Park is a monumental decision for Jurassic World: Dominion, but this year fans of The Exorcist also experienced a real shock when it was announced that a sequel to the 1973 film was in development. After David Gordon Green successfully relaunched the Halloween franchise in 2018, he was chosen to direct a new trilogy about the exorcist, which is related to the first William Friedkin film. Hamilton star Leslie Odom Jr. stars in the project, whose character turns to Chris McNeil (Ellen Burstyn) for help after his child is possessed by a demon. Burstyn has already shot scenes for the sequel, but, unfortunately, Linda Blair confirmed that she was not offered to play in The Exorcist 2.

Jurassic World: Dominion is a film radically different from The Exorcist, but it’s funny that Goldblum compares his return to a cult horror movie. Father Merrin is an elderly priest who agrees to perform an exorcism after retiring from practice, so the comparison makes sense, since Goldblum has not played a big role in the franchise since 1997. Pazuzu is from Regan, but hopefully Malcolm can survive when he fights dinosaurs in Jurassic World: Dominion.

The Director Of The Witcher 3 And Cyberpunk 2077 Creates His...