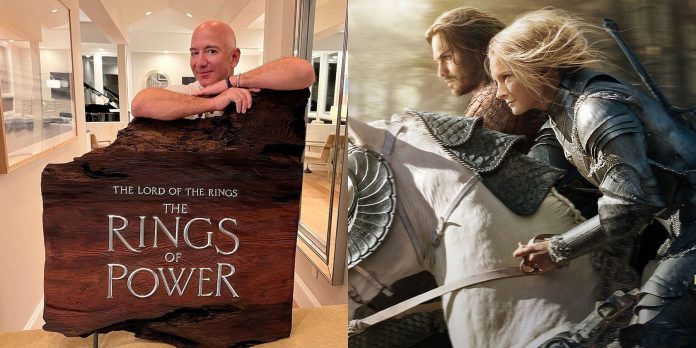 Unexpectedly appearing at the premiere of The Lord of the Rings: Rings of Power, Jeff Bezos shared the advice his son gave him regarding the show: “Don’t screw up.”

According to Deadline, the founder and executive chairman of Amazon unexpectedly appeared at the premiere of The Lord of the Rings series in Leicester Square in London. Bezos gave a short speech there, partly joking: “Every showrunner dreams of getting notes on early scripts and editing work from the executive chairman, they just like it.” He continued: “I want to thank you both for listening. whenever it helped, but mostly I have to thank you for ignoring me at the right time.”

Bezos also expressed support for Patrick McKay and J.D. Payne, whose appointment as showrunners of the Lord of the Rings series caused skepticism. The show will be McKay and Payne’s first major production credit, with the exception of an uncredited script role for Star Trek Beyond, and some have expressed concern about their apparent lack of experience. However, according to Bezos, “one of the best decisions we made was to bet on this relatively unknown team because we saw something special.” Before concluding his toast, Bezos shared his son’s wise words. “My kid is a big Tolkien fan, and after Amazon got involved, he came up to me, looked me in the eye and said, “Dad, please don’t screw up.”

In fact, this story conveys the general mood of the fans quite well. Amazon has a big burden on its shoulders. Their promise to present a large-scale TV show “The Lord of the Rings” based on materials not related to the main book series, which will be completely new to most viewers, is extremely ambitious. Add to that the boast that this will be the most expensive TV series ever created, and distribution rights, production budget and marketing for the first season alone will probably amount to almost $500 million. For fans of The Lord of the Rings, it sounds like a dream.

However, for Amazon, this could easily turn into a nightmare. At a cost exceeding the cost of most blockbusters, “Rings of Power” must be a huge success to bring the company at least one cent. In addition, its first episode will air on September 1, which will put it in competition with HBO’s own fantasy megaseries-the prequel “House of the Dragon”. For any other property, direct rivalry with the Game of Thrones series is financial suicide.

Indeed, the first episode of “House of the Dragon” broke records as the most watched HBO premiere of all time, and the second series attracted even more viewers. However, if anyone can compare with “Game of Thrones”, it’s “The Lord of the Rings”, author George R. R. Martin drew strong inspiration.

The premiere of the film “The Lord of the Rings: Rings of Power” will take place on Amazon Prime Video on September 1.