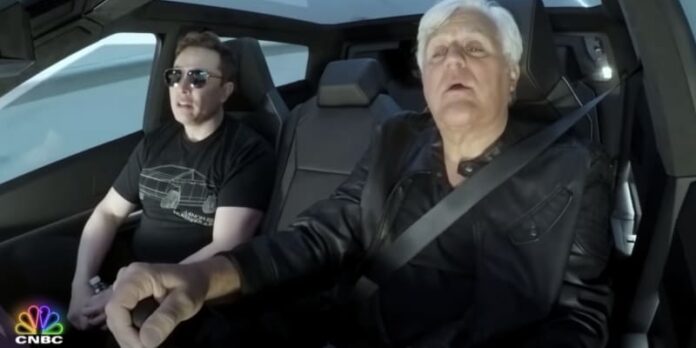 Tesla’s interesting car, Cybertruck and the company’s owner, Elon Musk, met with the audience in the program named Jay Leno’s Garage, which was broadcast last night. In the conversation that took place inside the vehicle, Jay Leno asked many questions to Elon Musk.

Elon Musk is one of the first names that come to mind when we say popular celebrities with different car designs and sensational life today. The passion of the car is something that has just been learned by the comedian Jay Leno, known for the Tonight Show, which has become a legend worldwide. The two star names came together for the program named Jay Leno’s Garage, and Elon Musk became the guest of Leno by taking Tesla’s interestingly designed electric car Cybertruck.

The electric pick-up model Cybertruck, introduced by the company last November, was very interesting and talked for days. Leno, who prepared the program named Jay Leno’s Garage, which tells about his passion for the vehicle, could not remain silent against the car and hosted the two in the episode published yesterday. This choice of Leno, who owns a Tesla Model S and does not hesitate to emphasize his support for Tesla at every opportunity, does not really surprise the viewers. In the program, Tesla’s Model 3, Model S, Model X, Model Y series as well as the upcoming Roadster model were discussed.

Fans are delighted to see Cybertruck live on a schedule:

The intriguing part for the audience was to see inside Cybertruck, and those who followed the program for this purpose were very pleased. The car, which left an open and airy feeling with the glass it contains, was seen closely. Jay Leno will also be very enthusiastic and curious about the situation that he chose not to hand over the steering wheel to Elon Musk throughout the program. Let’s not forget that the earliest production date for the electric vehicle, which is in the interest of automobile enthusiasts, will be 2021.

After the first trailer broadcast for the program, the large audience counting days to see Cybertruck was able to satisfy his curiosity, albeit a little. In addition, it is possible to say that the information that the electric pick-up will be designed as bulletproof and constructed with stainless steel also stands out as the duo repeats in the program. We shared the section that reached the high number of views both on television and on YouTube, for you, you can share your thoughts from the comments section with us after the cruise.

Better life: She’s making a Christmas chain for the holidays!