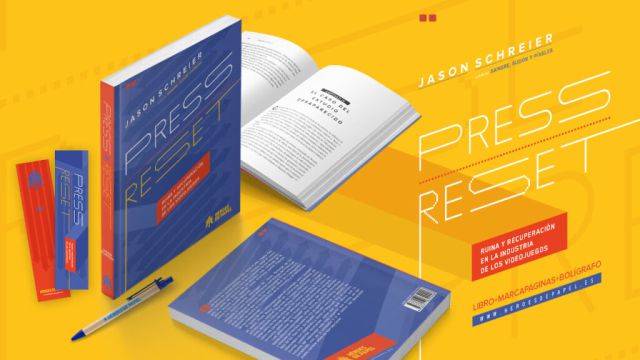 Press Reset: The author of the book Sangre, Sudor y Píxeles goes back into the entrails of the beast with an equally forceful and essential work. A harsh portrait of the video game industry. Nomadland, the winner of the Oscars in 2020, tells us about the new nomads in the United States. Multitudes of people who had lost their jobs with the economic crisis of 2008 travel the country again and again in search of the next precarious job without the possibility of taking root. You arrive somewhere, they hire you, they fire you when you’re no longer needed, and you’re back on the road. Chloé Zao’s film unwittingly exposes dangerous issues that almost romanticize that forced kind of life (it’s disturbing that Amazon opened its doors to the film crew when Bezos’s empire is, precisely, part of the problem). Because there is pain, uncertainty, real broken lives behind it all. Press Reset, the latest book by Jason Schreier, published in Spain by Héroes de papel, tells us about the North American video game industry very much in line with what the film tells, but with more value because it does not embellish something hardly justifiable with poetry. Jason thus approaches Land of Nomads, Jessica Bruder’s original book on which the film is based, for its conscientious journalistic portrayal of an unfortunate reality.

Jason Schreier needs little introduction at this point. He has been continuing for some time at Bloomberg the incisive eight-year work he did for Kotaku. He is always critical of a medium, that of video games, with a lot of room for improvement at the work level. His already mythical book Blood, Sweat and Pixels (also published in Spain by Héroes de Papel) would have channeled the industry through the extreme difficulty involved in creating a video game. These didactic analogies that appear in his very introduction are striking:

Making games is like shooting a movie where you have to build the camera every time you start a new project, (…) like building a building in the middle of an earthquake. Or try driving a train while someone else runs ahead to lay the tracks as you go.

Blood, Sweat and Pixels told us about such a feat in ten chapters, each one focused on a game. From huge Triple A projects like Uncharted 4 or Destiny, to what ended up being indie gems like Stardew Valley and Shovel Knight, through the cowdfunding of Pillars of Eternity and canceled games like Star Wars 1313. Everything that can happen in the process. The crunch as the usual accepted norm, the dehumanized decisions from the top of the company, the impossibility of predicting exactly and with certainty when a game can come out because absolutely anything can happen along the way… long-suffering workers behind Dragon Age: Inquisition waiting for the game to fail so that the bosses would realize that it was impossible to work like that… And how they later watched with horror the critical and sales success of the game. It was about the realization that they could never escape a work system that chews up and spits out its employees. No, we did not enchant the brightness of Ray Tracing in the pages of that book.