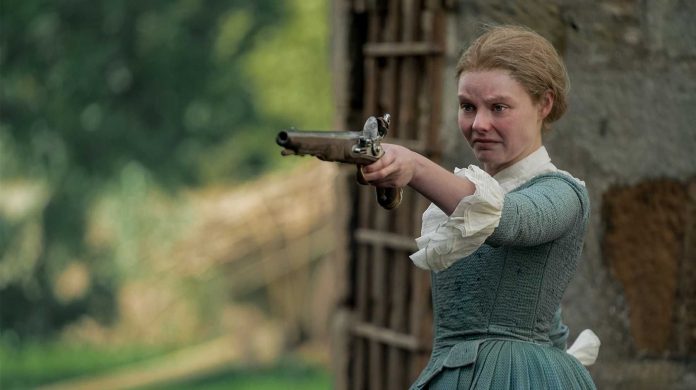 While Claire (Caitriona Balfe) languished in an unhappy marriage with her first husband Frank Randall and raised Brianna with him, Jamie (Sam Heughan) faced his own series of trials and tribulations in Outlander.

Jamie (Sam Heughan) became a fugitive for seven years after the Battle of Culloden, before serving time as a Jacobite in Ardsmuir Prison, and was eventually released to work in England as a hired servant.

When he returned to Scotland, Jaime was still broken and at the urging of his sister Jenny Murray he married Laoghaire MacKenzie (Nell Hudson). However, the union did not last with problems between Jamie and Laoghaire with the couple living separately.

Jamie worked as a printer in Edinburgh, publishing potentially seditious pamphlets while Laoghaire lived in Lallybroch. This was where Claire found him when she traveled back in time with the couple quickly rekindling their passionate romance as if not a day had passed.

Although Jamie was honest about the son Willie he had fathered during his time at Helwater, he held back when it came to his second marriage to Laoghaire.

Unfortunately, Claire only discovered the truth when Laoghaire unexpectedly appeared in Lallybroch with her daughters in tow, so Claire was distraught over Jamie’s betrayal and hiding such an important part of her life from him, telling her that she needed some alone time to process it. everything. On the flip side, the Outlander producers have talked about why Jamie held back:

“We had the biggest debate of the year about where to play this Laoghaire secret because some people in the room felt that Jamie is an honorable guy,” admitted showrunner Toni Graphia.

“But it makes perfect sense not to say it right away because this dream is falling from the sky and you are not going to say anything in the first minutes or the first 24 hours, you are just taking your balance,” revealed showrunner Matthew B. Roberts.

He went on to say how the writers planned to analyze the big reveal about Laoghaire (Nell Hudson), but admitted it didn’t work out.

“Well, he kept this big secret from her because we really felt that he couldn’t risk losing the woman who had returned to him, the love of his life after 20 years, hitting her in the face with this great revelation just when she returns.” .

From the looks of it, Jamie (Sam Heughan) was just waiting for the right moment to tell Claire (Caitriona Balfe) everything and was terrified of losing her again. Their fears were justified to some degree after Claire was shocked by the reveal, but their love eventually won out and they were able to get over that.

“Lights Up”: Harry Styles Debuts in Top 20 on Billboard Hot...

Meghan Markle and Harry confined to Los Angeles, they are preparing...