Home Entertainment Jamie called Ayesha a bully after “Below Deck Down Under” because “he... 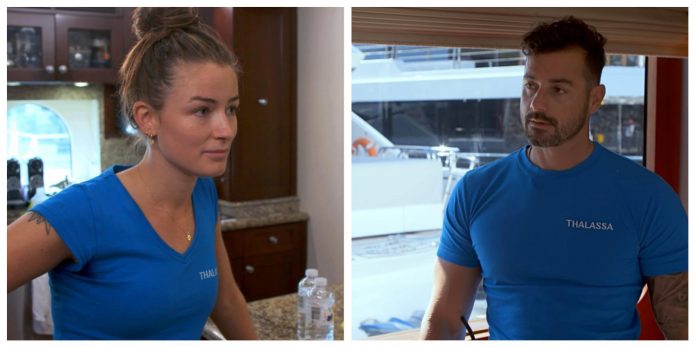 Ayesha Scott regrets joking with Jamie Syed in “Below Deck Below,” but said he only calls her a bully because people pull him for his management style. And tries to turn away.

Syed took to Instagram after a hot episode of Under Deck Down Under, where he got angry when Scott, Brittini Burton and Magda Ziomek called him a bitch during a drunken team night in the city. He told the film crew that he doesn’t like being called a “bitch”, although they use this term in a joking way.

The next day, Syed was so annoyed that he told Captain Jason Chambers that the team did not respect him. But then he was disappointed when Chambers didn’t do anything.

Syed said on Instagram that Scott and Burton were, in fact, bullying him, and this could not be tolerated in the workplace.

Captain Jason listened to Ayesha in “Below Deck Down Under”—not really Jamie.

Scott believes Syed may have lashed out at her because Chambers seemed to be listening to her, not especially him. “Oh, am I a bully? Get out of here,” Scott told Cheat Sheet Showbiz. Adding Chambers’ inaction to his frustration only angered Syed. “So, yeah, I think he’s already pretty disappointed that Jason isn’t listening to him.”

“And he seemed to listen to everything I said,” she recalled. “So I think he probably had a little chip on his shoulder in relation to me.”

Ayesha said that the whole crew was joking about the word “b****”.

Scott said the entire production team has been doing this throughout the season. “I think with the whole Jamie situation, it was so difficult because we were all walking around the boat, like all season, we were like, ‘Hey, bitch!’ That’s what we all did to each other. ,” she said. “It was so friendly. And I probably didn’t realize that I hadn’t told Jamie about it until that moment. So when we started, it was a lot of fun, friendly. And his reaction was unexpected.”

“But when I left, mentally I thought, ‘Respect this. That’s what he asked. Respect that. Respect that.” But after I had a few drinks, I just couldn’t,” she admitted.

Ayesha also thinks Jamie is playing defense after some fans and the “Under Deck” team criticized his management style.

“I think the reason I couldn’t respect it was because he was trying to turn it into a much bigger value. Because he gets a lot of shit online because of his poor management,” Scott said. “And so he’s trying to turn this into a much bigger problem. And now we’re scolding him. But being with him all season and being around him, I can say that the reason for his reaction is that this is his whole personality. He desperately wants to be macho and masculine, and the word “bitch” is a feminine word.”

“And so he couldn’t stand it because it contradicted his personality,” she continued. “And so something like that, I can’t respect, it’s so stupid. That’s why after a couple of drinks I just couldn’t stand it and egged Madga on. We apologized and all that.”

“But I think he should run straight to Captain Jason without chatting with us, especially with Brittini [Burton], who has been working for him all season. I just thought it was a really shitty act on his part, and he kind of showed me that you’re not that macho, because you can’t even come and talk to your team members before running to daddy,” she said. added. “And now he’s turned it into us bullying him.”

So what’s left for Syed and Scott today? “I see through his game,” she said. “It made me lose so much respect for him. So no, we’re not in touch.”

Episodes of “Below Deck Down Under” are currently airing on Peacock.

Bachelor’s Degree: What Juan Pablo is planning in 2022