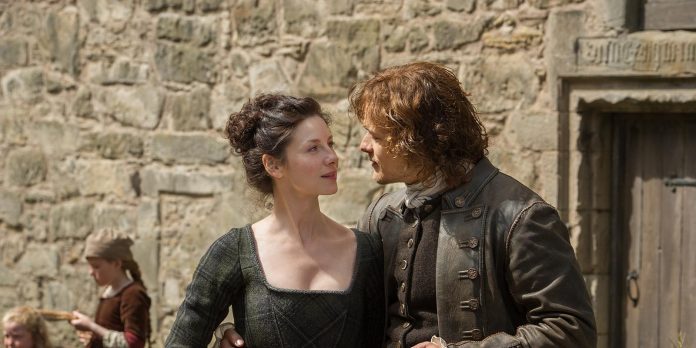 The last two seasons of Outlander took place in their North Carolina home at Fraser’s Ridge. But knowing the deep ties the pair have to the highlands, fans wonder if the Frasers will ever return to Scotland.

Recall that Outlander is based on Diana Gabaldon’s books and thus far each season has loosely aligned with the stories from the novels but as Gabaldon fans know, the series has taken some creative license and altered some characters and stories.

For example, in the book series, Murtagh, who died at the Battle of Culloden in the books, lived much longer in the television series and the ordeal of Brianna’s kidnapping and Stephen Bonnet’s death appear much later in The timeline.

In the sixth book, the adventures of Claire (Caitriona Balfe) and Jamie (Sam Heughan) continue to unfold in the Colonies. However, in the seventh novel, An Echo in the Bone, they travel back to Scotland to visit Jenny and Ian.

Considering that season 5 of Outlander dipped into several stories from the sixth book, including Brianna’s knowledge of her half-brother and Claire’s kidnapping, it’s possible that season 6 will take advantage of the events of An Echo in the Bone.

So there is a chance that fans can see Jamie and Claire sail back to Scotland when the show returns. By now, Outlander fans know not to rely too heavily on the books for spoilers.

Because the writers try not to make the Starz series too predictable, so they add different elements to the author’s stories. In addition to a recent preview panel for the upcoming season, showrunners Maril Davis and Matthew B. Roberts revealed some details.

Without revealing too much, they teased that Brianna and Roger would be facing something fun and new and suggested that a larger story is coming for Lizzie. In turn, the production of the sixth season of Outlander is currently underway, so the Starz series should return sometime in the second half of 2021.

Dove Cameron reveals how it works on her mental health