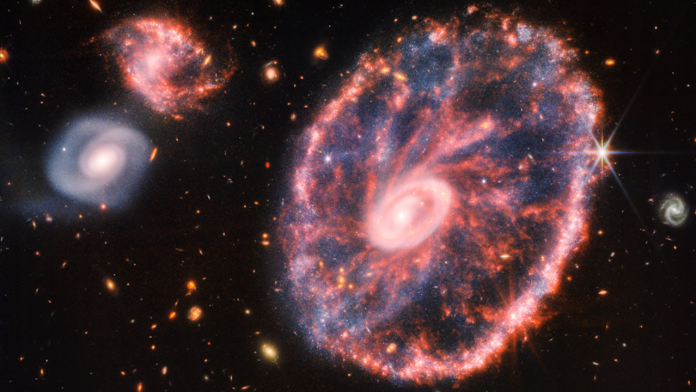 NASA’s James Webb Space Telescope has captured a stunning image of the Cartwheel galaxy, revealing new details about its formation, shape and structure.

An image released by NASA on Tuesday shows the Cartwheel galaxy in unprecedented detail. A large pink spotted galaxy resembling a cartwheel is depicted at a “very transitional stage” next to two spiral companion galaxies located about 500 million light-years from Earth in the constellation of the Sculptor in the southern sky.

This cosmic snapshot offers a new look at how the Cartwheel galaxy has changed over billions of years and how it is likely to evolve in the future. The researchers say that the shape and structure of the Cartwheel galaxy show that it was created as a result of an intergalactic collision “between a large spiral galaxy and a smaller galaxy,” which is not visible in the image.

The striking shape of the galaxy is formed by a colorful outer ring and a bright inner ring with glowing spirals radiating from it. NASA explains that these rings expand outward from the center of the collision, “like ripples in a pond after a stone is thrown into it.” These distinctive features have prompted astronomers to classify the Cartwheel galaxy as a “ring galaxy,” making it a much rarer phenomenon.

According to NASA, the galaxy’s bright core “contains a huge amount of hot dust, and the brightest areas are home to giant young star clusters.” “On the other hand, the outer ring, which has been expanding for about 440 million years, is dominated by the processes of star formation and supernovae. When this ring expands, it crashes into the surrounding gas and triggers star formation.”

The James Webb Space Telescope was launched last December and was designed primarily for infrared astronomy. It is “the most powerful telescope ever launched into space,” and its vastly improved infrared resolution and sensitivity allow it to see objects too old, distant or dim for the Hubble Space Telescope, as well as helping to explore habitable conditions.

The Cartwheel galaxy image is the latest in a series of images taken by the James Webb Telescope. President Joe Biden unveiled an image of the galaxy cluster SMACS 0723, known as the First Deep Webb Field, during an event at the White House last month. Later, the photo was published on the Internet along with other images and data from the orbital observatory.

The cover image is provided by: NASA, ESA, CSA, STScI.

Northwest continues to upset her mom while Kim Kardashian talks about...