Home Entertainment James Milner Talks About a “little conversation” With Haaland During the Victory... 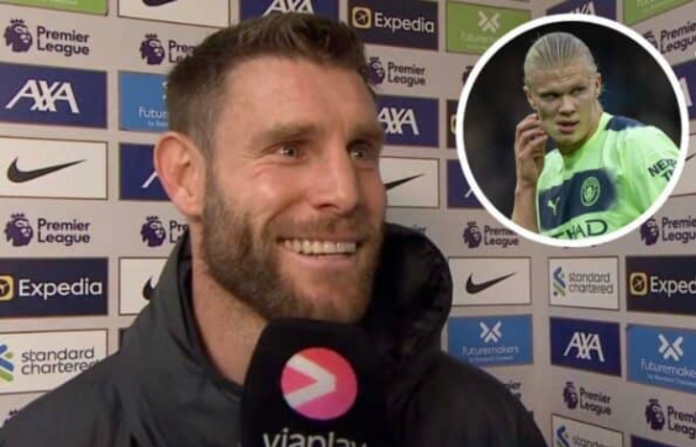 James Milner was part of an audacious team performance when Liverpool beat Manchester City 1-0 on Sunday, with the vice-captain calling it a “confidence boost.”

Before the start at Anfield, there were concerns about Milner’s role on the right side of defence against Phil Foden.

But he steadfastly reassured them with an outstanding performance as the Reds won for only the third time in the Premier League this season against their main rivals.

The narrative throughout the game was the clash of Erling Haaland with Virgil van Dijk, in which the Dutchman undoubtedly won, but perhaps the Norwegian was more interested in Milner.

A former Leeds youth product who came through the academy when the striker’s father, Alf-Inge Haaland, was part of the senior team, the No. 7 shared a mutual bond.

And when asked by Jan Aage Fjortoft if Haaland was talking about “Leeds, Leeds, Leeds” again, Milner told Viaplay that they had “a little conversation.”

“I can confirm that he said he was going to sign for Leeds a few years ago when we played against him and he was obviously lying, so it’s disappointing!” the 36—year-old recalls.

Milner went on to praise the Anfield fans for an “absolutely outstanding” atmosphere that contributed to a “fantastic team game” in which “the boys sacrificed themselves for the team.”

Not only for Milner himself, but the victory may have proved the critics wrong when it came to Liverpool’s hopes for the campaign.

“It’s nothing to us, but there’s a lot of talk outside,” the vice-captain said.

“As for us, we’re just trying to keep improving.

“We know that we are not playing as well as we can, we had problems with injuries and made changes, and we did not succeed as we would like.

“But as for us, we’re just trying to take what we always do, trying to fight to be the best, working on these issues on the training field, putting everything into every game.

“That’s what this team will always do.

“It should be a great surge of confidence to be able to show such a game against City and win.”

Assassin’s Creed: Black Flag has one advantage over Skull and Bones