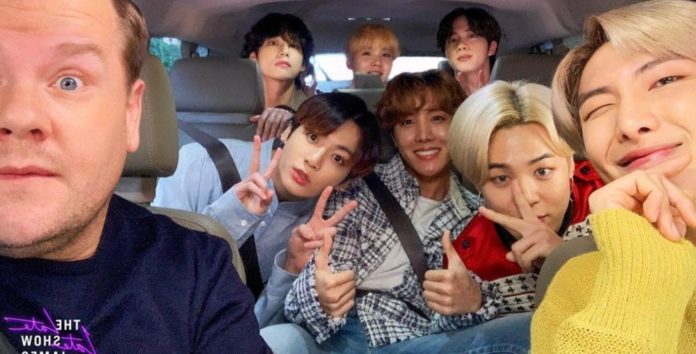 Tomorrow we can finally see the adventure of the boys of Bangtan next to James Corden in carpool karaoke . This is one of the most popular segments of the program and that, in addition, has had great celebrities as guests while touring the city in a car singing the best musical hits they have had in their career .

The BTS carpool karaoke is probably one of those that have created more expectations, the high popularity of the boys is increasing at every moment and, with it, people who expect to see them having fun in a show , even more so if it is one that He has received them with open arms since long ago.

The first preview for this short of the program has been posted on the social networks of The Late Late Show, filling ARMY with excitement around the world. This is a clip where we see the boys already installed in the car along with James , who thanks them for helping him get to work, while RM responds ‘The taste is ours’.

We can hear in the background the intro of ‘ON’, the promotional single from Map of the Soul: 7, and when the ideal moment arrives, we hear the boys and James join to sing the choir. While they joke, James calls Jimin Mochi and then asks them. Is this the way to invite me to be part of the band?

It shows that they had a great time touring the city and talking about their new record material and, if the previous clip has moved us, we don’t want to imagine what it will be like when we can watch the full show. Are you excited to see the boys on The Late Late Show with James Corden?

GOT7 reveals teaser photos for their comeback