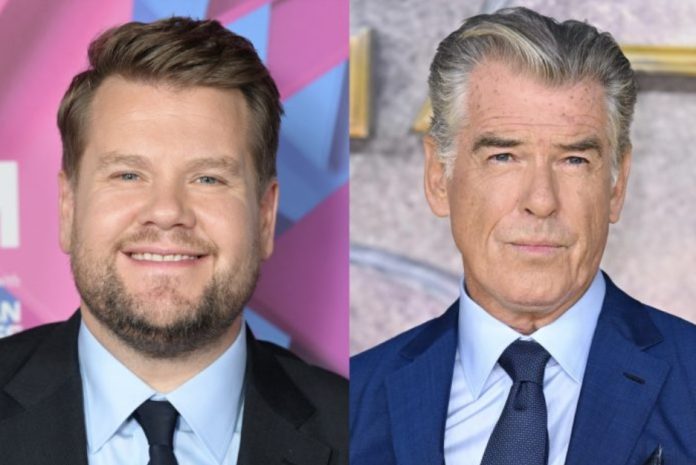 During the truth or Dare segment “Unravel Your Guts or Fill Your Guts” on The Late Late Show, guest Khloe Kardashian asked Corden to name a celebrity who has been rude to him in the past.

Since the alternative option was to drink a glass of bird saliva, Corden was hesitant to answer at first. However, in the end he decided to reveal the awkward encounter with Brosnan.

“I don’t think he’s a rude person, he just turned out [to me],” Corden said. “I went to U2 and I was there with my friend Louis and his wife and my wife, and Pierce Brosnan was with a few friends.

“They left halfway to leave, and we left a place [for them]. And then they were gone for quite a while, and Bono was kind of right there on the big runway in the middle of the show – it was on the Forum.

He continued, “So me and my wife moved into this area, and literally, I’ve never felt anything like this, this hand went through here [his shoulder] and just pushed me away.

“And I looked at him, and he didn’t even look at me. He has just returned to his neighborhood.”

After Kardashian suggested that Brosnan may have been “drunk,” Corden replied, “Maybe he’s just fucking rude.”

Last week, Corden hit the headlines after he was temporarily banned from a New York restaurant due to his “abusive behavior.”

The talk show host is said to have been “extremely unpleasant” towards employees on two separate occasions.

However, Corden has since apologized for his behavior, and his ban on visiting the restaurant has been lifted.

Nick Cannon is asked about the possibility of more babies as...