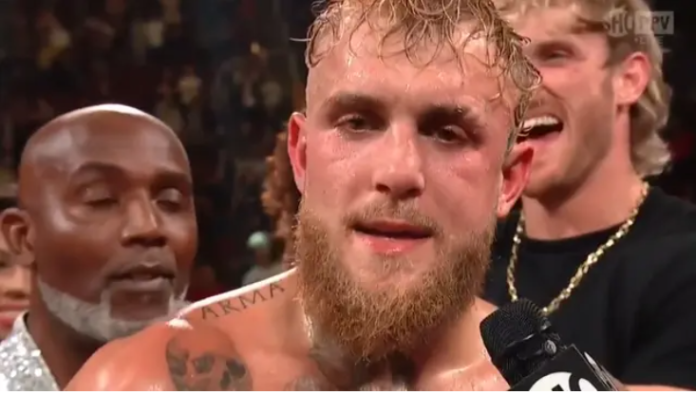 Before Saturday’s main event, Silva and Paul’s fans had high hopes for their fighters. They claimed that Paul would easily knock out Silva because of the age difference, or that Silva would teach Paul a lesson thanks to his many years of experience.

However, after several shaky rounds at the beginning of the match, Jake Paul struck with dynamite in the eighth round, sending Silva to the carpet – the only time during the fight when any of the fighters was knocked down. Although it wasn’t a knockout, Paul won by unanimous decision.

Of course, this is not the last fight of a Troubled Child. He stated that this is just the beginning of a rivalry that he hopes to start with the MMA community. After a major victory, he was allowed to name the next potential opponent.

Oh Nathan, coming into my dressing room before my fight? Throwing drinks like a pussy. Will settle this if u ever get out of your UFC contract.

Until then let’s change the game. I got big plans. I invite you to join Anderson & I to launch the United Fighters Association. In? https://t.co/nqIPjlgjBn

Reflecting on the fight in the post-match interview, Jake Paul was asked what people would say now that he had defeated one of the most formidable MMA fighters in the world. “They’ll say, ‘Fight a real boxer.’ Bitch, I tried. If I walked on water, they would say that I can’t swim.”

He also took the time to call out professional MMA fighter Nate Diaz, who attended the event. “This is just the beginning, baby. I want Nat Diaz, the bitch. He tried to come into my locker room. He was trying to cause shit. And then he always leaves the arena.

“So, Nate Diaz, stop being a bitch and fight me. And Canelo, you too. You guys said, “Oh, you can’t beat someone.” You can’t beat the attacker. You can’t beat a legend like Anderson Silva.” I just did it. So why can’t I beat Canelo?”

Of course, we’ll just have to wait and see who Paul announces for his next fight. As he continues to annoy the boxing community and sold-out arenas, he may soon be going to fight a professional boxer here.

Explanation of the new Xbox Game Pass for the first Day...

The Fairy Farm seems to be a more magical valley of...