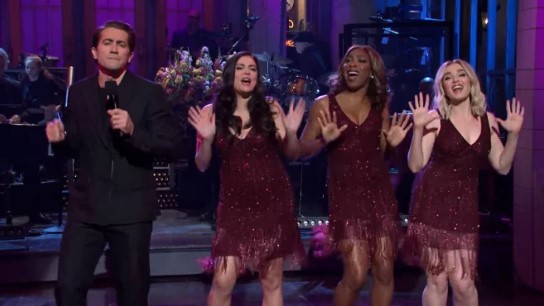 Sing, Jake! Jake Gyllenhaal is back on stage Saturday Night Live with a musical trick up his sleeve.

The 41-year-old “Ambulance” star sang Celine Dion’s number “Everything Comes Back to Me Now” on Saturday, April 9, in the episode after noting that he thought his return to the variety series would be difficult for the second time.

“I never thought SNL would call again,” Gyllenhaal began his monologue. “I mean, it’s been 15 years and I wasn’t sure I’d remember how to behave, but being here tonight, it feels like everything is suddenly coming back.”

During the musical performance of the “Brokeback Mountain” star, he was joined by actors Chloe Fineman, Ego Nwodim and Cecily Strong on backing vocals. Women’s burgundy dresses were dedicated to his debut in January 2007. (Maya Rudolph, Amy Poehler and Kristen Wiig, for their part, wore similar dresses when they sang accompaniment for Gyllenhaal.)

“I’m so excited to be back on SNL. The last time I hosted guests was in 2007. Do you know how long ago it was? It was like 400 Marvel movies ago,” the California native joked about his return to NBC. “To give you an idea of what it was like in 2007, the show I hosted had a sketch of [President] George W. Bush, there were jokes about the first iPhone, and this is my photo from my monologue. …Here I am in full dress, singing a song from Dreamgirls to promote a movie where I played a gay cowboy. That was actually the least problematic moment in that episode, but looking back, I feel like I was a completely different person.”

He continued: “You know, it’s funny. I had a reputation as a serious actor with an intense method, but to be honest, I wasn’t even that good at acting. …The truth is that I only used this method because I thought it was what you need to do to become a serious actor—and I kind of forgot how to have fun.”

Gyllenhaal, who was joined by musical guest Camila Cabello during Saturday’s episode, explained that he is ready to experience the joy of playing again during the show.

“It’s a sham, and it’s fun, and it should be filled with joy. Well, I finally accept this joy again, and that’s why I’m standing on this stage again,” the “Spider—Man: Far from Home” actor concluded his monologue.

Viewers of social networks were amazed by his musical abilities and courage to perform a number from the repertoire of the 54-year-old native of Canada.

“You know, I didn’t think Jake Gyllenhaal would be able to redeem himself in front of me personally, but the fact that he sings Celine Dion on #snl may have just convinced me,” one fan tweeted on Saturday. “If you want to try *these notes* live, knowing that you won’t succeed, you have balls of steel.”

Another joked: “Umm. I don’t know if I can handle the magical perfection of Jake Gyllenhaal singing Celine Dion’s most beautiful song. Faint.”

While SNL viewers may have been overwhelmed by Gyllenhaal’s musical talents, Saturday’s show wasn’t the first time he sang in public. He previously played George Seurat in the 2017 Broadway revival of Sunday in the Park with George alongside Annalee Ashford.

“We only had 10 weeks on Broadway and it seemed so unfinished,” he told ET Canada about working on the Tony Award—nominated production in December 2019 ahead of its UK revival. “To come to London and kind of finish what we haven’t finished yet and do it all together again here, I don’t think we ever believed we’d do it, so it’s like a dream.”

Kate Middleton and William on Zoom with Nursing Students