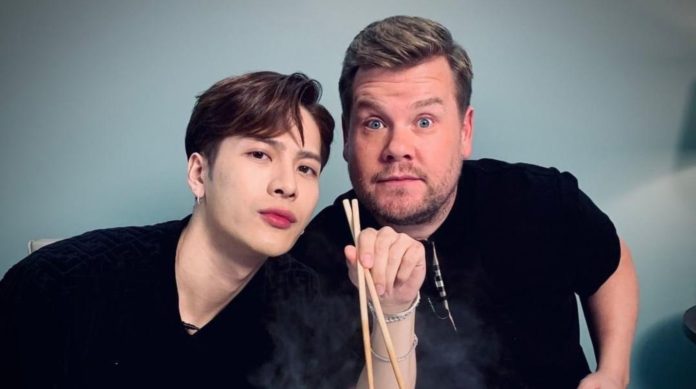 Every day is a new opportunity to learn different and interesting things, don’t you think? Throughout his career, Jackson Wang has shown us that he has no limits when it comes to acquiring new knowledge and has just made it clear once again. The idol starred in a fun session of ‘This Is How We Do It’ with James Corden. Keep reading to find out everything!

Jackson Wang was the special guest of the ‘This Is How We Do It’ section of James Corden, where they both embarked on a new adventure trying to teach each other things that are typical of their culture. In this fun video we can see how the idol teaches James some basic phrases that he can use in case he ever travels to China. Leave in the comments if you also need a language teacher like Jackson.

Later, Jackson and James shared some traditional foods from their countries of Origin. Corden showed the idol the ‘Stargazzy Pie’, a dish that included some whole fish heads. However, Wang took him by surprise when he tried to eat a full one, which is why James had to stop him immediately. LOL!

jackson: james we got you on tape pic.twitter.com/fR22nmfUAS

Near the end of the video, the session of practicing sports arrived. Jackson tried to teach James some fencing, but the fun began when they both started playing soccer. Wang demonstrated his skills as a footballer by scoring several goals with minimal effort; His celebration was epic.

Was Taeyeon A Victim Of Fraud? Snsd Idol Clears Everything