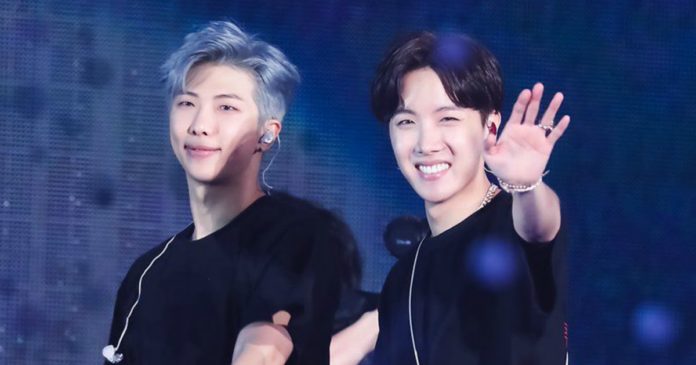 Creative idol designs have deep meaning. To be closer to the fans , the idols occupy the different social networks to live and chat, one of the favorite of Korean artists is the VLive platform .

J-Hope and RM made a live broadcast through VLive , where apart from living with fans they transformed the official lightstick of BTS , the new version 4 that was recently revealed.

With some paints and tools, J-Hope and RM gave their ARMY BOMB a new aesthetic, making it an entire work of art that delighted fans who excitedly watched the idols’ creative process .

Namjoon opted for a design inspired by nature, between colors like green and blue, RM painted a great sun and impressive mountains that distinguish his new ARMY BOMB , the leader of BTS asked the audience ‘What name should it bear ? ‘, Jungkook replied that he will call it’ Earth ‘since there was a lot of life in it.

J-Hope captured all his love and affection for ARMY , he took the color black and at the center of his ARMY BOMB he drew the BTS logo , underneath he wrote one of his favorite words ‘ ARMY ‘, to give the rapper a special touch to adorn the handle of the lightstick with a purple paper and some flowers.

To remember this great moment Namjoon and Hoseok uploaded a selca where they very proudly pose with their creative ARMY BOMB designs , their followers did not hesitate to fill them with love and praise in the comments.

Jungkook made a special appearance at the end of the broadcast revealing that he was practicing boxing, so he only went to greet ARMY to recharge his energy and return to combat with great enthusiasm.

Tom Holland and Nadia Parkes as a couple thanks to Sophie...