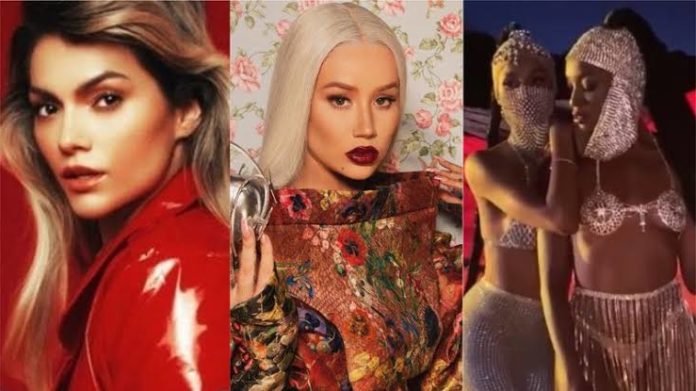 Iza and Ciara, Iggy Azalea and Kelly Key are among Friday’s Releases. Still has Pericles, BTS, The Script and many others.

Nothing better than starting the weekend with a lot of new music! This Friday (8), many people were present with releases, starting with Iza that joined Ciara and Major Lazer in Evapora, new single from the group formed Walshy Fire, Ape Drums and DJ Diplo. In music, Iza and Ciara share vocals in Portuguese and English, but Like a Boy’s performer also risks a little in our language:

Also new to Diplo is Niall Horan, former One Direction, who released a remix of Nice to Meet Ya in partnership with the DJ:

Iggy Azalea, who returns to Brazil for a single performance on December 15 in Sao Paulo, is also on new music with Lola, the first single since the rapper’s second album In My Defense was released this July:

In addition to Ciara, who also ventures in another language is rapper Nicki Minaj, testing Karol G’s Spanish on TUSA:

After releasing a Make It Right remix with Lauv, BTS relaunched the hit once again. Listen to the acoustic version of the partnership between the k-pop group and the American artist who comes to Brazil in 2020 at Lollapalooza:

For fans of The Script’s melodic pop-rock, the album Sunsets & Full Moons just came out of the press. Separates the handkerchiefs and comes to hear:

In the team of Brazilians, who is back is Kelly Key, with the Do Jeito Delas EP and partnerships with POCAH, Cynthia Luz and Preta Gil:

After splitting the Multishow Award stage into a performance with Baco Exu from the Blues, former Exaltasamba Péricles also has news on Friday. The sambista released the live album Messenger of Love, Pt. 2, with hits such as Seduction Game, If I Drop the Brake and Never Was Lucky, Always Was God, featuring Jorge Vercillo and Jeniffer Nascimento:

And Gabily is going around with her ex-boyfriend in the dancing My Ex: