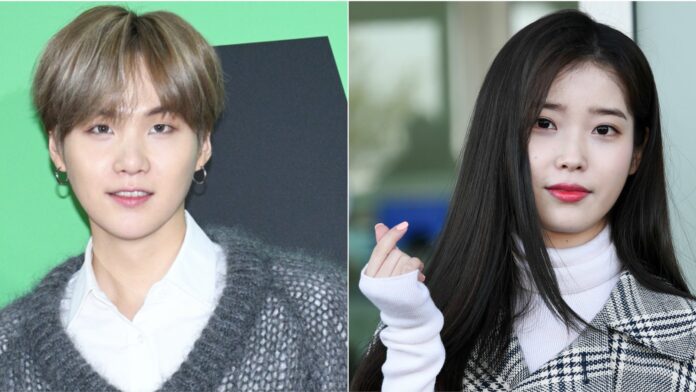 A few hours after their premiere, the melody of these two idols is receiving love from their fans. IU and Suga premiere ‘Eight ‘, their collaboration with resounding success .

Since it was announced that these two idols were to work together in the comeback of IU , fans were thrilled to know that they could enjoy their combined musical talents with the potential of producing Suga and the melodious voice of IU . ‘ Eight ‘ is being very well received by the public.

The official video of ‘ Eight ‘ that was released a few hours ago and already has more than 5 million views and 1.9 million likes so far on the official channel of 1TheK, one of the most important promoters of K-Pop in said platform.

The triumph ‘ Eight ‘ was automatic, since he has broken records impressive, the collaboration of IU and Suga has become the first song to exceed 100,000 likes in music platform Korean of Melon only in just 3 hours from launching.

Other tracks that have surpassed that amount of ‘likes’ on Melon were BTS hits , such as:’ ON ‘which achieved those numbers in 38 minutes and ‘ Black Swan ’39 in minutes, the two melodies belonging to the record material of ‘ Map of the Soul: 7 ‘.

Also, the comeback track where Suga performed the arrangements , played the piano and wrote the rap debuted at No. 1 on the iTunes music chart in the United States and 22 other countries, a position that has been held by Korean artists like PSY, J-Hope and RM.

Fans are posting their admiration for the idol and singer on social media with the hashtags # EightBy93Line, #EightOut and #IUXSUGA, which quickly became a global trend on Twitter and other platforms.

BLACKPINK and Lady Gaga collaboration already has a release date

CAITLYN JENNER ENSURES THAT HE HAS BEEN 6 YEARS WITHOUT TALKING...