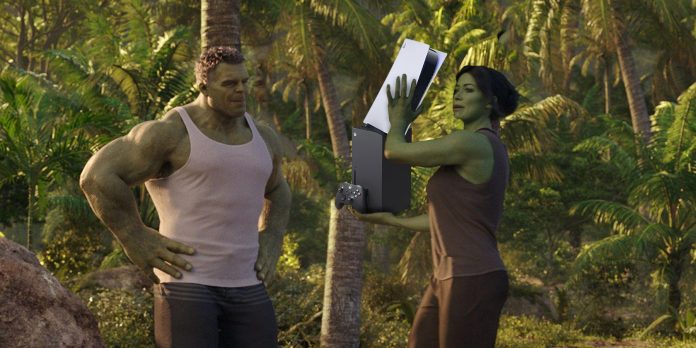 The Hulk has been one of the main elements of the Marvel cinematic universe from the very beginning, but it seems he never managed to create a great video game. Now Bruce Banner has been joined in the MCU by his younger cousin Jennifer Walters through the Disney Plus show She-Hulk: Attorney At Law. This will further increase the Hulk’s presence in the franchise, and the Female Hulk will also become a prominent character. Both characters will eventually become household names, and this will make them ideal candidates for video games.

The name of the game, when it comes to the Hulk and the Hulk Woman, is power and destruction. Both characters become big green monsters capable of dealing huge damage with a single hand movement. It seems like these power packs would fit perfectly into a sandbox video game, but since 2008, the industry has shied away from creating a Hulk-centric game. Instead, the character was given a supporting role, and the Hulk Woman was relatively absent. from almost every Marvel-based video game.

The Hulk has had several appearances in video games

Over the years, Hulk has played a major role in several different video games and a minor role in many others. His first appearance in a video game was in 1984 in a small title known as Questprobe, featuring the Hulk. It was a very simple game by today’s standards, and it was the first time players could control Bruce Banner. Players will need to enter various commands for the Hulk to advance through the mysterious lair. Today it is not so relevant, but at that time it was received by critics quite positively.

The next time players will be able to control the Hulk in 1994 in the side-scroller The Incredible Hulk. This time the Hulk had to fight the Leader and his army to prevent him from taking over the world. Players will complete various levels and defeat enemies in a classic side-scrolling gameplay. The title also had several different endings depending on the difficulty, and this rewarded multiple playthroughs. However, in the eyes of critics, this would not be enough, and the game received generally mixed reviews.

After that, there were several games based on The Hulk, but one of the best Hulk games came out in 2005 with The Incredible Hulk: Ultimate Destruction. It became a sequel to the 2003 Hulk and again gave players the opportunity to control the infamous Marvel superhero. The game offered the opportunity to move freely through an open world in which special attention was paid to destruction. When players caused damage, the game sent military units to fight the Hulk like the Grand Theft Auto police. It also had a decent story in which the Hulk came face to face with the Abomination.

Since 2008, the Hulk has not been in the spotlight of video games. Instead, he played a more minor role in the larger Marvel games. He has appeared in games such as LEGO Marvel Super Heroes, Marvel Ultimate Alliance 3: The Black Order and most recently in Marvel’s Avengers. Although some of these games allowed players to feel the power of the Hulk, most of them were not at the same level as individual games.

Hulk and She Hulk Have Become Household Names

Hulk has been a part of the MCU since the beginning, and has gone through immense change since his introduction. His story is now further being expanded on in the brand-new Disney Plus show She-Hulk: Attorney at Law. The show has also introduced a second member of The Hulk family with Jennifer Walters’ She-Hulk. While she is not a household name like Hulk, she will most likely become one as her corner of the MCU grows larger.

Unlike Bruce Banner, Jennifer Walters has never starred in her own video game. Instead, she has always been on the sidelines, with her most recent appearance being in Marvel’s Strike Force. While she has been a part of the comics since the 1980s, she has never gotten major attention from the video game industry, However, all of that should change now that she has made her MCU debut and will most likely spike in popularity as more people discover her story for the first time.

The Hulk is one of Marvel’s most popular characters right now, and the Hulk Woman is rapidly gaining a new fan base outside of comics. The video game industry should take advantage of this popularity and create another standalone Hulk game or the first ever standalone She-Hulk game. Both games will be very different, but they can bring a lot of fun to superhero fans.

A new game about the Hulk would have to focus heavily on the destructive nature of the character, since it is she who attracts a lot of people to him. The criticism the MCU has received for the Smart Hulk shows that fans would prefer to have the destructive power of an unmanageable Hulk, and a video game could provide that by giving players control of the green behemoth and allowing them to cause destruction in the open world. sandbox as they could in 2005 with The Incredible Hulk: Ultimate Destruction. Add a good story and Hulk fans can flock to it.

The She-Hulk game was supposed to draw inspiration from the 2013 Deadpool game and be a fun adventure that breaks the fourth wall. The character is much more comedic than Bruce Banner, and her character is not focused on how much destruction she causes. Instead, the game should be a comedic superhero with a dash of super-powered antics. It would be harder to juggle, but the game could be very fun and unique.

Both the Hulk and the Hulk Woman are major parts of the Marvel roster, but in Marvel video games they have mostly been relegated to the status of minor characters. With the surge in popularity thanks to the MCU and She Hulk: Attorney at Law, it’s time for the industry to make another Hulk-centric video game. There’s never been a better time for this, and Marvel fans would probably be thrilled.