Home Entertainment “It was my decision” — Alisson’s Emotional Reasoning About Her Father’s Disappearance... 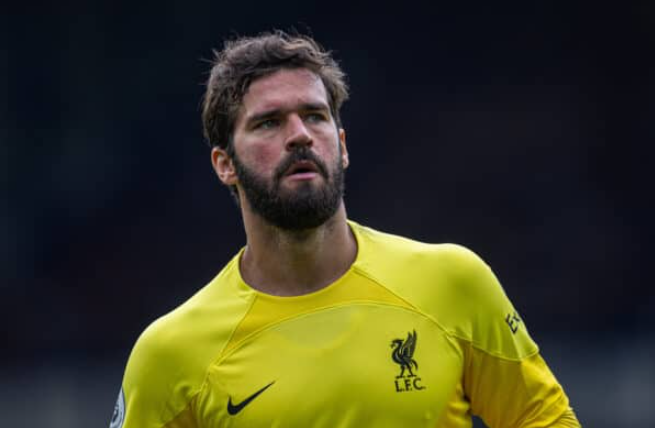 In February 2021, Alisson’s father tragically died after drowning while swimming in a dam on his territory in Brazil, and the Liverpool goalkeeper now explains his decision to skip his funeral.

At that time, the Covid-19 rules prevented Alisson from returning home, but now the Liverpool goalkeeper said that the club was ready to do “everything” so that he could return home.

However, since his wife was pregnant at the time, the Brazilian called for staying on Merseyside, and Liverpool’s ongoing struggle to reach the Champions League was another factor that influenced his decision.

“I remember that the time he passed away was at the height of the pandemic and I was unable to attend the funeral,” he told UOL.

“I participated online, it was my decision. Liverpool offered me everything to get there, my teammates offered me a charter flight so I could go straight to Porto Alegre. They would have done it for me if I wanted to, but I couldn’t go right now.

“My wife was pregnant, she was in danger, and I couldn’t put her in danger. I couldn’t leave her alone. She suffered as much as I did.

“My mother was my concern, but my brother managed to be with her. At that time, it was a rational decision to stay away.”

Alisson’s decision to put his team first is typical of his incredible character, which Jurgen Klopp and his teammates have repeatedly stressed in recent years.

Of course, Liverpool’s number one will score a vital goal for the Reds on their way to the Champions League. An incredible moment, just a few months after his father’s death.

It was this goal, as well as the birth of his son, that gave him the strength to survive such a difficult time.

Liverpool were also going through a difficult time, fighting for a place in the Champions League, and if I had gone to Brazil, I would have had to spend some time in isolation, and I do not know if I would have had time to return to finish the season. My teammates needed me too,” Alisson continued.

“I stayed at home for three days without training, and it seemed like an eternity. The day I came back, I realized that I had to move on because of the gratitude to my father, as well as for the strength I received from people in the world of football and my club.

“I only lost one game because I really didn’t have the strength at that moment, but then I started playing again. I experienced many joys at once. It was the season when I scored a goal. My son was born in the middle of all this, two months after his father’s death. These things inspired me to move forward.

“I have three children, a wife, a mother… Everyone who loves and supports me is enough to continue. The unity of the family at that moment gave me strength. They are the ones I follow.”

Alisson Becker. What a goalkeeper, but above all, what a man.