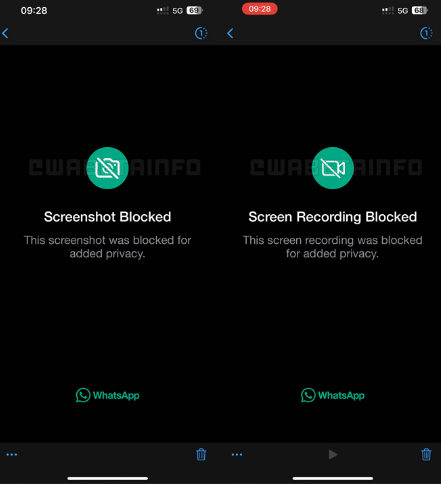 The latest beta version of WhatsApp for iOS has brought new information about the ability to block screenshots from one-time photos and videos. A feature that is still in development will look like this.

WhatsApp, the world’s most popular instant messaging app, has undergone some very important changes. This feature, which appeared in the beta version of WhatsApp for iOS with the code 22.21.0.71 and is still in development, looks so clear for the first time.

There will be those who know; the one-time photo and video viewing feature has appeared in WhatsApp for a long time. This feature allowed the sent photos and videos to be shown only once on the other side. However, this function had a very important drawback. So much so that a user who made a one-time image could take a screenshot. We warned you about this when this feature was released. The latest beta version of WhatsApp for iOS shows that there is very little time left for this situation to change.

This is what the screenshot lock function will look like!

A new feature discovered by WABetaInfo prevents the creation of screenshots on one-time photos and videos. Thus, users will be able to send their photos and videos in a “one-time view” mode in a more secure way. However, it should be noted that security is not fully ensured here. So much so that the other party can record a one-time video or photo using an additional device. By the way; It should be noted that within this function, the screen recording function on phones is also blocked. Therefore, WhatsApp has thought through all the possibilities.

WhatsApp officials have not made any statements about the upcoming feature. At the moment we don’t have any information about when this feature will be available. However, it is believed that the feature found in the beta codes of WhatsApp for iOS will be published in the near future. Moreover, this feature will be useful not only for iOS, but also for Android users, websites and computers.

Arrested For (not) Spying On WhatsApp Others: The Hackstorsion Scam