Home Sport “It could have been worse” — Klopp sets deadlines for the restoration... 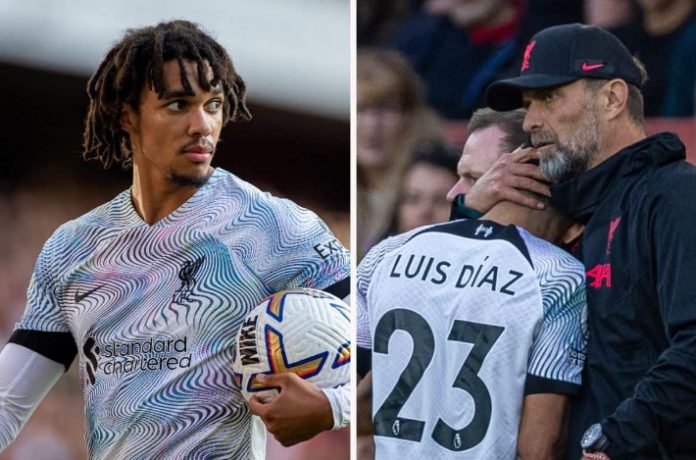 Jurgen Klopp says the injuries sustained by Trent Alexander-Arnold and Luis Diaz “could have been worse” after the Liverpool pair were forced to perform against Arsenal on Sunday.

Reports received in recent days suggest that Alexander-Arnold is likely to miss two to three weeks after an unpleasant ankle roll led to him being taken off the field at halftime of the match against the Gunners.

Diaz was less fortunate: due to a knee problem, he will most likely not be able to perform until after the World Cup, although surgery is not required.

It also became known on Tuesday that Joel Matip faced a shin problem in the match with the Gunners, and although the injuries of all three will be a bitter blow during a busy period of the season, Klopp is relieved that the problems have not gotten worse.

“I thought we were a bit lucky with Trent because, to be honest, the ankle didn’t look very good,” he told reporters ahead of Wednesday’s Champions League clash with Rangers.

“Lucho, now they say six to eight (weeks) or something like that, so we’ll see how long. Lucho looks like a fast healer, but you need to be careful with this.

“It could have been worse, the way he moved after the game, and actually Joel just felt a little bit, you do a scan, and then he’s out too.

“It’s not very good, but this is the situation, now we have to deal with it, and we will do it.”

When Klopp was once again asked about the severity of Alexander-Arnold’s injury, he said that the right-back could be out for only two weeks.

“It’s always hard to talk. Less than a month, yes. I heard two weeks, but we have to see if it’s right,” he continued.

“This is the information I received. I’m not sure I’m allowed to say that, to be honest! I thought it was longer when I saw him after the game, but I will easily survive these two weeks.”

Liverpool were encouraged by the news that Andy Robertson, Curtis Jones and Alex Oxlade-Chamberlain have returned to training, but Klopp sought to downplay the chances of their return to the team in the near future.

Robertson may be involved against Rangers, but Jones, Oxlade-Chamberlain and Naby Keita are among those who remain on the sidelines.

“They only trained for a couple of days. We can’t just put them in now,” Klopp continued.

“Robbo is in the squad for tomorrow. Curtis is gone, Oks is gone, Nabi is gone. That’s all.

“It’s important that the boys come back, but it’s not that they train twice, and now “let’s go.”