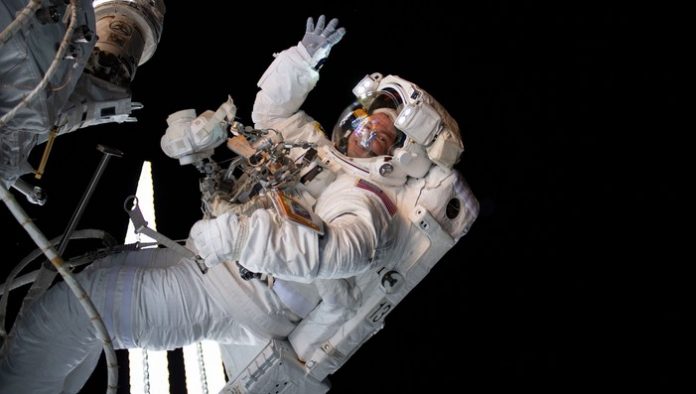 NASA astronauts Victor Glover and Mike Hopkins had to check the vehicle for ammonia contamination during a spacewalk outside the International Space Station (ISS) on Saturday 13 March.

Note that the sun-facing side of the station needs a cooling system to control its temperatures. Without the cooling system, outside temperatures would rise up to 121 degrees Celsius. This is why the system uses liquid ammonia pumped through pipes to keep the temperature constant as part of the Active Thermal Control System.

ISS will continue research on the subject

About an hour before the spacewalk, astronauts were extracting ammonia from part of the system before relocating a jump line. Both Hopkins and Glover were close to the hose when disconnected and ammonia flakes emerged from the system. “Oh yes, look at that,” said Hopper as the air-conditioning started.

Although control and astronauts knew that some frozen ammonia flakes would be exposed, more than expected came out of the hose, so they needed extra safety measures.

About 10 minutes after aeration, mission control called for a pause and checked with astronauts how much ammonia was released. “I felt more than I expected,” Hopkins told the staff. Also, although Hopkins had the ammonia coming out of most stations and estimates that there were less than 30 flakes, some thought that his helmet was touching the visor.

Mission control acknowledged Hopkins’ opinion and said, “We’ve seen things from our camera views here that resemble the repulsive action of stamps, so we’ll go ahead and be conservative and call it a suspected contamination case.”

After a visual inspection after the event, the astronauts’ clothes were found to be free of ammonia crystals. They will also check the ammonia crystals in the airlock when the mission control spacewalk is complete.

This requires extra care because the team wants to make sure no ammonia is brought to the station, as it is corrosive and can irritate the eyes and lungs.