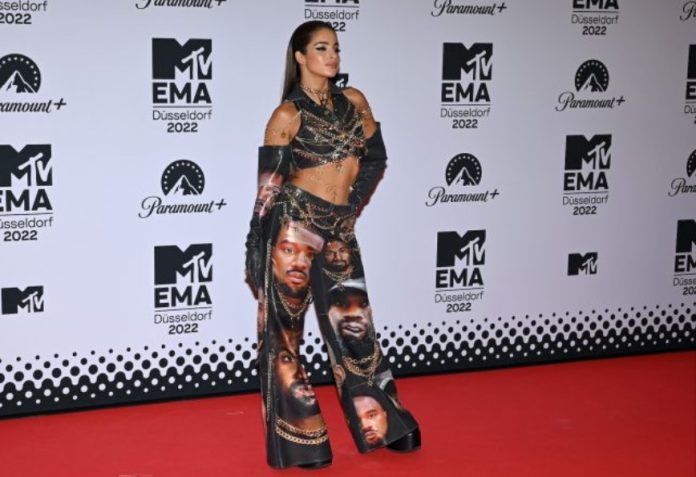 The singer wore an outfit featuring photos of the rapper, saying she is “proud to be an Israeli artist who represents Israel in the world”.

Israeli pop star Noa Kirel wore an outfit decorated with photos of Kanye West last night (November 13) at the MTV EMA in “message to the world”.

Last month, West was banned from Twitter and Instagram after posting a series of anti-Semitic messages. He went on to say that he did not believe in the term “anti-Semitism” and was “jealous” of Jewish culture.

At the EMA ceremony in Dusseldorf, Germany, on Sunday evening, Kirel appeared on the red carpet in an outfit that had many photos of Ye’s face, and The Israel Times reported that the singer called this choice “a fashion item with a message for the whole world.” ; a point that signals that I am both a Jew and an Israeli.

“We have encountered a lot of anti-Semitism, especially in light of Kanye West’s statements. I am proud to be an Israeli artist who represents Israel in the world,” she said.

“Oh yeah,” she wrote on Instagram along with a photo of the outfit.

Over the past 24 hours, Dave Chappelle’s opening monologue on Saturday Night Live has been accused of “popularizing” anti-Semitism.

The comedian began his participation in the show last week (November 12), joking about the anti-Semitic statements of Kanye West and Kyrie Irving, saying that the former had to apologize to “buy himself some time.”

“I’ve probably been doing this for 35 years, and at the beginning of my career I learned that there are two words in the English language that can never be pronounced together in a row, and that’s: “Jews,” Chappelle said. “I’ve never heard of anyone doing good after saying that.”

Later in a monologue, Chappelle explained why the anti-Semitic belief that Jews collectively rule the world is wrong, comparing it to anti-black racism in some parts of America.

Jonathan Greenblatt, CEO of the Anti-Defamation League, condemned the monologue, tweeting: “We shouldn’t expect Dave Chappelle to serve as a moral compass for society, but we are concerned that [SNL] is not just normalizing, but popularizing anti-Semitism. Why is Jewish sensitivity denied or belittled at almost every step? Why is our injury causing applause?”