Home News Israel vaccinates 70% of its population against COVID-19 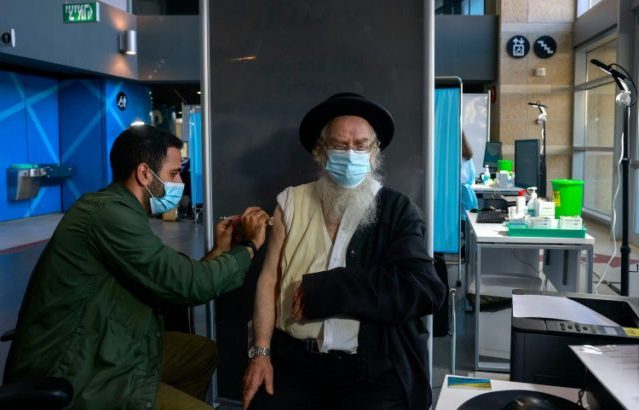 70% of the population over 16 years of age have already been vaccinated against COVID-19 in Israel with the Pfizer doses.

The Government of Israel implemented a successful vaccination plan against COVID-19 for its population, with the result that in just two months, 70% of inhabitants over 16 years of age have received their respective doses of Pfizer.

In total, 4,456,000 people have already been vaccinated, of which 3,076,000 received their second dose, according to information from local media given to Somagnews.

As Prime Minister Netanyahu pointed out, there will be no shortage of doses to end the immunization process for the entire population of almost 9 million.

“I have some important news, I spoke to my friend last night, Pfizer CEO Albert Bourla, and we agreed that there would be a supply chain for Pfizer vaccines. No shortage, no disruption, no rest. Go get vaccinated, ”said the head of state.

Thanks to the successful vaccination plan, it was reported that there are currently 77% fewer cases of coronavirus contagion among people 60 years and older, including 65% fewer serious illnesses and 63% fewer deaths.

In order for the country to slowly begin to regain its normal life, the Israeli Ministry of Health launched its “green passport” program. This document is required from this Sunday to enter certain places and participate in certain activities. It can only be obtained by people who have been vaccinated or have recovered from the coronavirus.

As part of the program, registered gyms, theaters, hotels, concerts and synagogues can now operate.

“This is the first step to return to an almost normal life,” Edelstein explained days ago, during an extensive briefing. Edelstein added that soon there will be workplaces that will have to require their staff to be vaccinated or otherwise have a coronavirus test every 48 hours.

The green passport is granted to those who have been vaccinated against the coronavirus for a week, or to the approximately 740,000 people recovered from the virus who are currently not entitled to the vaccine.

The lifting of restrictions is part of the second phase of the de-escalation that Israel began on February 7, after a third national lockdown of six weeks to contain the spread of the coronavirus.

The third phase will start on March 7, when the reopening of cafes and small restaurants and the return to school for the students of the courses that until then will continue in virtual mode are expected, the authorities specified.

The country is carrying out a gradual de-escalation to avoid a new peak in infections, while continuing with the most advanced vaccination campaign in the world and trying to reduce the morbidity rate, which has been decreasing slightly in recent days.

Around 47% of Israelis have already received at least one dose of the vaccine, and the government intends to immunize most of the population at the end of March, when the country will hold general elections.

Israel’s Ministry of Health reported that the latest data from studies conducted in the country revealed that the Pfizer / BioNtech vaccine is 98.9% effective in preventing death caused by COVID-19. In addition, the vaccine has 99.2% protection against serious diseases, reduces morbidity by 95.8% and reduces the possibility of hospitalization by 98.9%.

The data represents Israelis who have received both doses of the vaccine, 14 days after their second dose, versus people who have not received any inoculation, as of February 13, the Health Ministry said.