Home Entertainment Is Madonna out on Tik Tok? Viral video has given rise to... 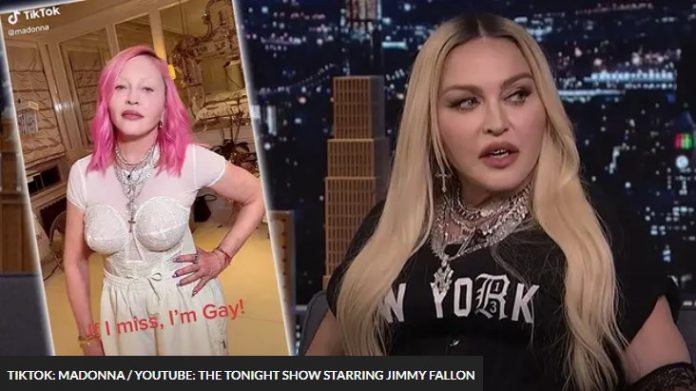 Some fans are convinced that pop icon Madonna has revealed herself to be a lesbian in her latest video on TikTok, which has taken social media by storm.

Madonna, hailed as the “queen of pop,” is going viral on TikTok – and it’s not because of a new song.

On October 9, the world-famous singer and songwriter uploaded a video to TikTok in which she showed herself with bright pink hair, holding a pair of identical underpants in her hands.

Captioning the video “If I miss, I’m gay,” Madonna threw her underwear in the trash, but completely missed, and the panties fell to the ground about a foot away from her.

The singer then cheekily snapped his finger before the clip ended… and fans are convinced that this video means Madonna has just come out.

“Did I just see Madonna coming out?” one commenter wrote. “Good for her.”

“Did Madonna just come out? And am I watching this in real time?” another asked.

However, other viewers point to several cases from the pop icon’s past in light of this latest video, claiming that this is not the first time she has publicly hinted at her sexuality.

Many commentators recall Madonna’s famous kiss with Britney Spears at the 2003 MTV Video Music Awards — a kiss that the two stars recreated earlier this year.

On top of that, others point to Madonna’s video clip for her song “Justify My Love”, which shows romantic scenes between same-sex couples.

That’s not all; commentators also refer to the singer’s past interview, in which she reportedly said: “I won’t say I’ve never slept with a woman, but… I love men,” according to NewsWeek.

It is clear that Madonna has been advocating for LGBTQ+ rights for a long time, and her latest upload caused excitement on the web, as well as prompted fans to talk about the achievements in her past that led to this viral moment.