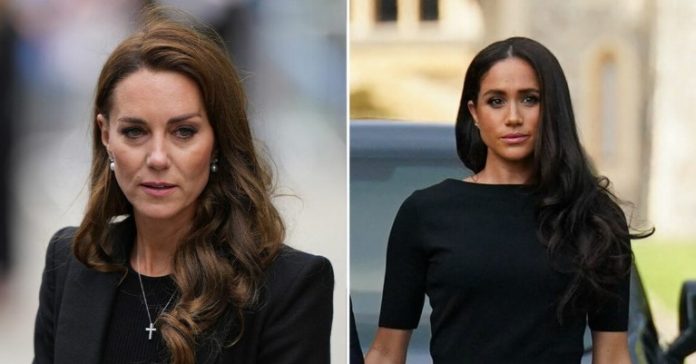 The funeral of Queen Elizabeth II failed to mend relations between two daughters-in-law, Meghan Markle and Kate Middleton. Meghan has never had a good relationship with the Princess of Wales. However, their relationship deteriorated after the departure of Prince Harry and Meghan from the United Kingdom. Moreover, Prince William and Kate are unhappy with the Sussex for their explosive interview with Oprah Winfrey and other ambiguous statements.

The demise of Britain’s longest-reigning monarch has led to the two brothers reuniting with each other. Four members of the royal family, including Harry, Meghan, Kate and William, have appeared together in the last few days during the state funeral and the Queen’s funeral. In an unexpected turn of events, William also invited the Duke and Duchess to look at the flowers near Windsor Castle. However, frequent meetings in the last two weeks have not contributed to reconciliation between the two brothers Princes. The royal expert also shed light on the behavior of Meghan Markle and Kate Middleton with each other.

A look at the relationship between Meghan Markle and Kate Middleton

While people are hoping to see the four royals together again, royal expert Russell Myers has revealed the current status of the relationship between Meghan Markle and Kate Middleton. He stated that the two royal women did not say a word to each other during the ceremonies. In addition, while the Duke and Duchess of Sussex were in the United Kingdom, they did not have personal meetings or chats with the Princess of Wales.

“Sources report that the Princess of Wales and Meghan are not known to have exchanged words throughout the entire period of the Sussex family’s stay in the UK,” Russell Myers said, quoted by the Mirror.

The information is not hard to believe. Meghan was spotted standing alone away from other members of the royal family during the late monarch’s state funeral. Then it turns out that Kate is “waiting for an apology” from the Duchess of Sussex.

During her interview with Oprah, Meghan Markle revealed how Kate made her cry right before the royal wedding. They quarreled over the flower girls, as a result of which Megan burst into tears. Kate didn’t like the interview, and she hopes that the former American actress will apologize.

Is there any chance of an improvement in the relationship between Megan and Kate? Share it in the comments.

Cancer patient: Tim Lobinger does not believe in healing