Home Entertainment Is Apple Music stuck on the iPhone lock screen? Here’s how to... 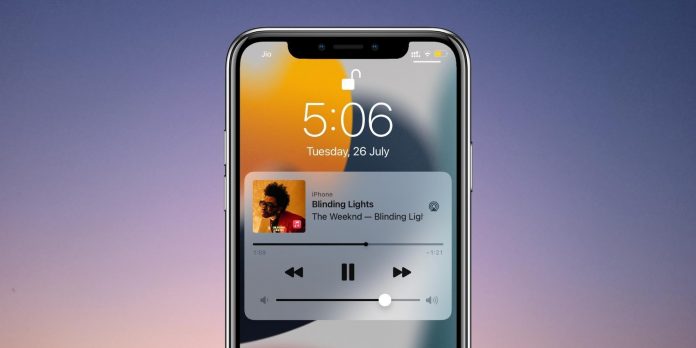 Although the Apple Music lock screen widget is quite useful, it sometimes freezes and it seems impossible to remove it. From time to time, an iOS bug or bug occurs that affects users around the world. Back in May, due to a similar Apple Music error, the app icon was displayed in fourth place on the iPhone home screen. Apparently, Apple Music was replacing other icons of third-party applications.

Another recent bug in Apple’s music streaming service caused the lyrics to disappear. Users have also reported that they cannot stream music with lossless sound or Dolby Atmos. Others complained about the inability to play music, even if it was downloaded for offline use. As with all iOS bugs, Apple usually releases a fix quickly. However, the Apple Music lock screen error seems to be a recurring problem that occurs from time to time.

If the Apple Music player cannot be removed from the iPhone lock screen, users should check whether music is playing through another connected device, such as AirPods. If so, pausing the music should cause the Apple Music widget to disappear after a few seconds. However, if the widget freezes on the lock screen without playback, forcibly exiting the Apple Music app from the recent apps section can easily fix the situation. To do this on iPhone X and later models, swipe up from the bottom of the display and pause for a second. Swipe left or right to view the latest apps, and swipe up on Apple Music to close it. On an iPhone with a Home button, the Recent apps section opens by double-clicking the Home button.

How to Get rid of the Apple Music lock screen widget

A thread on the Apple developer forums says that the solution to this problem is to disable the “Today” view. This will disable the lock screen widgets from the iPhone and remove Apple Music from the lock screen. To do this, go to “Settings” and scroll down to open “Touch ID and Passcode”. Find “Today View and Search” and click on the radio button to turn it off. Another method that can fix the Apple Music lock screen error is to disable notifications for the app. To do this, go to Settings, click Notifications, scroll down to find Apple Music, and turn off the Allow Notifications switch for the app.

Users can also try to uninstall and reinstall the Apple Music app. Sometimes the application crashes during execution, and reinstalling the application can solve the problem. If none of the fixes work, it’s time to reboot the iPhone. Most often, restarting the iPhone can fix most temporary problems or errors. Regardless of whether the Apple Music app is playing a song or not, restarting the device should remove the widget from the home screen. Users can also try a full reset if a simple restart doesn’t work. However, if nothing helps, it’s most likely an Apple Music bug for which Apple will eventually release a fix.