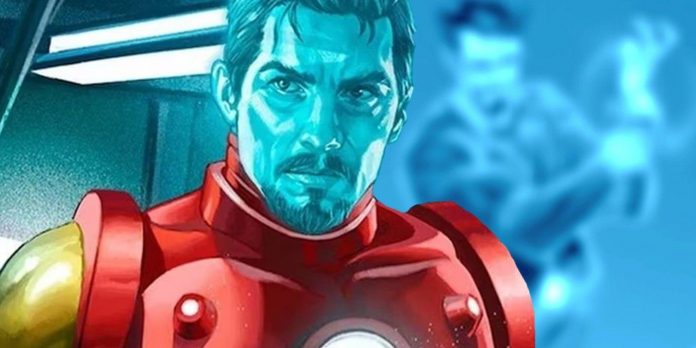 Warning! Spoilers for the “X-Men of Hellfire” Gala from Marvel Comics
Tony Stark is swapping his armor for a much more casual look, as Iron Man’s costume at the Hellfire 2022 gala dates back to one of his most controversial eras. In the new version of the cover by Iban Coelho and Jesus Aburtov for Iron Man # 21 from Marvel Comics, the hero wears a blazer with a hologram that reminds readers that he once became an artificial intelligence. projecting yourself into one of Tony Stark’s most bizarre storylines.
In the comics, Iron Man became a hologram after falling into a coma while fighting Captain Marvel at the end of Civil War II. While the original Tony Stark was in a coma, he transferred his consciousness into the armor, which allowed him to become the mentor of the Iron Heart of Riri Williams in the form of a hologram projection. Iron Man will remain an AI. projection for a considerable time before returning to your physical form. Now Tony Stark’s costume at the Hellfire Gala pays homage to his controversial time spent away from the body.
Related: Captain Marvel Gets the Ultimate Payback for “Killing” the Avengers
The new Iron Man #21 cover by Iban Coelho and Jesus Aburtov shows Tony Stark’s Hellfire Gala costume, which he will wear at the upcoming X-Men celebration. While other heroes have preferred the bombastic outfits of high fashion, Iron Man adheres to much more casual things, but in his own way. Tony wears a red hologram blazer with a backlight. The suit has thin sunglasses, a watch and a belt similar to an arc reactor. The controversial reference to the time when he was a hologram shows that Iron Man can be a good sport for his past transformation. Although his appearance leaves much to be desired compared to some other costumes at the event.
The X-Men may feel disrespected by Iron Man’s casual appearance. Emma Frost made it clear that this evening is dedicated not only to high fashion, but also to celebrating the mutants of Krakoa. Tony Stark, who appeared in jeans and a shirt, although with a blazer with a hologram, does not seem to comply with the dress code of the event. This doesn’t mean that the Iron Man costume at the Hellfire gala is bad, but the contradictory look of the restored hologram seems like a strange choice for the hero.
It would be fun to see Iron Man in costume at the Hellfire Gala, which turned his armor into an extravagant high fashion ensemble. Instead, Tony Stark arrives at the event in an image that not only doesn’t fit the theme, but also forces readers to recall one of his most controversial storylines. A blazer with a hologram of Iron Man could attract attention at the event, but not for the reasons he hoped for. The cover with Stark will appear in the upcoming issue of Iron Man #21 from Marvel Comics.

Escape Academy: The passage of What lies behind us

RDR2 and other sequels are better than their original games