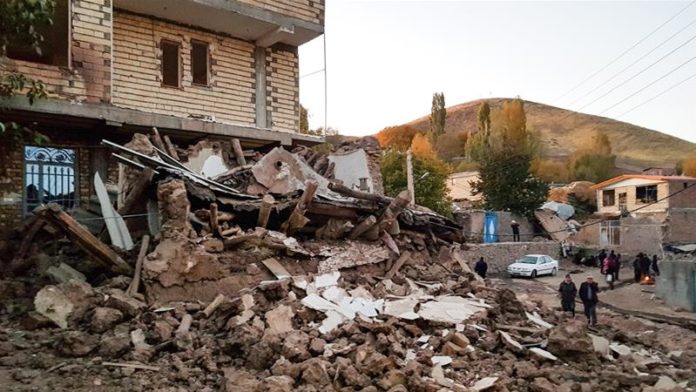 an earthquake in Iran-Turkey border in the evening became more square. The second Iranian earthquake was measured as 5.8. 9 citizens died in the first earthquake and 37 people were injured.

Another scary earthquake occurred after the earthquake of 5.7 at 08.53 in Hoy province of Iran. European Mediterranean Seismological Center (EMSC), according to a statement made by a 5.8 magnitude earthquake in Iran by the Iranian-Turkey border occurred. The earthquake happened 163 kilometers west of the city of Tabriz in northern Iran.

According to the information received from the Department of Disaster and Emergency Management (AFAD) Earthquake Department, the magnitude of the earthquake, which is the Hoy city of Iran at 19.00, is 5.9. According to the data of Boğaziçi University Kandilli Observatory and Earthquake Research Institute Regional Earthquake – Tsunami Monitoring and Evaluation Center, the magnitude of the second earthquake is 5.8. The earthquake that occurred five kilometers deep in the ground was also felt in the provinces in the border region, especially in Van.

9 people died in the first earthquake
“After the 5.9 magnitude earthquake that occurred near Hoy city of Iran, our settlements nearest to the earthquake have been scanned and it has been learned that there are no negative cases of injury or loss.” The statement said.

Due to the earthquake that occurred in the morning, many houses were destroyed in Gelenler Mahallesi, Van’s Başkale district, and some of them were damaged. In the neighborhood, as a result of the collapse of the stables, a large number of cattle were also reported to be under debris.