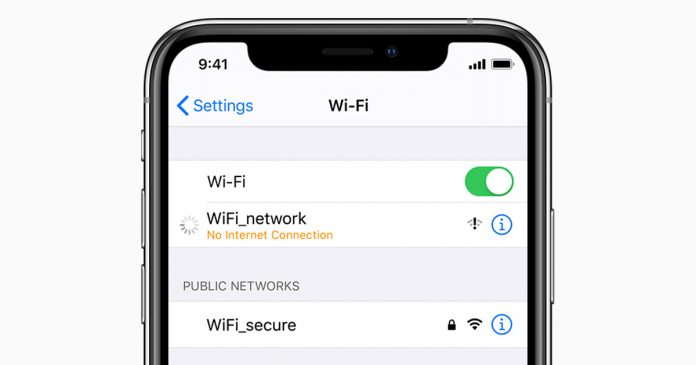 iPhone has a new Wi-Fi vulnerability discovered and more serious. A rather alarming new piece of news has surfaced two weeks ago regarding a strange bug that affects iPhones and when triggered, these devices cannot connect to any WiFi hotspots. Fortunately, the error had a simple but somewhat cumbersome solution and could easily be avoided by not connecting to wireless networks with symbols in their names. It turns out that there is another iPhone Wi-Fi error with almost similar characteristics, but it is almost impossible to avoid and also more difficult to fix.

The first vulnerability involved Wi-Fi access points or networks that used the percent sign (“%”) in their names. In many programming languages, this percent symbol is used to indicate that the character following it should be a command rather than a letter to be displayed. Somewhere in the iOS code this must be breaking the platform’s ability to fully connect to any Wi-Fi network. Luckily, resetting the phone’s network settings was getting things back to normal.

This initial error can only be triggered if the user tries to connect to such a Wi-Fi network. Unfortunately, the second Wi-Fi vulnerability that has emerged doesn’t even need any user interaction. According to the same security researcher who made the first mistake public, even being within range of a network called “%secretclub%power” is enough to lose all Wi-Fi functionality and the ability to connect to Wi-Fi networks.

To fix iPhone Wi-Fi vulnerability, it is necessary to reset the device
Even in this case, there is still a solution for the iPhone, but it seems not as simple as resetting the network settings. In this case, the iPhone needs to be completely reset or restored from a backup, if available. The person can still try to back up their phone while it is affected by the said Wi-Fi error, but the backup will need to manually edit the network list to remove the offending wireless network name.

The first iPhone WiFi bug we saw two weeks ago was a trap waiting for careless users. But this latter appears to be a serious vulnerability that anyone with control over a WiFi router or access point can exploit. No information has been given from Apple yet, but we guess that the company will release a bug fix in an update that will be released soon.