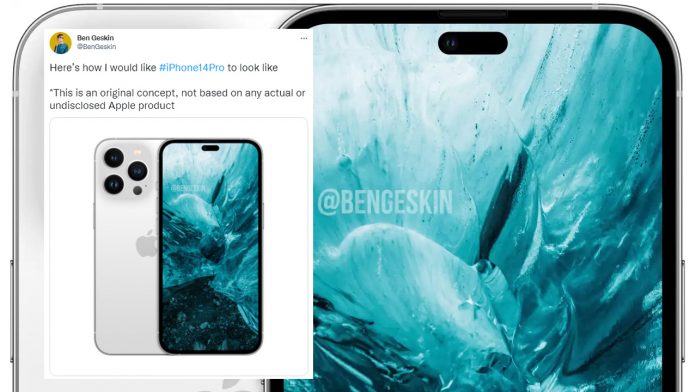 iPhone 14 Pro: Ben Geskin, known for his leaks on Apple products, shared the screen design he wanted to see on the iPhone 14 Pro. The most striking detail in the concept image is the absence of the notch, which Apple has been stubbornly getting rid of for a long time. In the period of about a month since Apple introduced the iPhone 13 family, many claims have already emerged about the iPhone 14. Most of these claims were about the features that the consumer could not see on the iPhone 13s. The newly proposed possibility, which we will talk about now, is also related to the much discussed notch issue.

Ben Geskin, who is known for leaking information from Apple and has strong connections with the company, explained his views on the possibility of the disappearance of the front camera notch. Stating that it would be more appropriate for the notch to be much smaller, if not absent, Geskin shared an image of what the screen might look like without a notch.

According to Geskin, the iPhone 14 Pro’s screen should look like this:

Ben Geskin, known for leaking information about the 2020 iPad Pro, iPhone XS Max and iPhone X; shared a photo showing the screen design he wanted to see in the Pro member of the next iPhone family. Supporting his previous statements about the iPhone 14 with the photo he shared with the statement “This is the iPhone 14 design I would like to see”, Geskin dropped the note, “This is a concept image, it has nothing to do with a real or secret Apple product”.

Xiaomi Announces New MIUI 12 Interface at the End of the...