Home Tech iPhone 13 vs iPhone 12 comparison: What has changed? 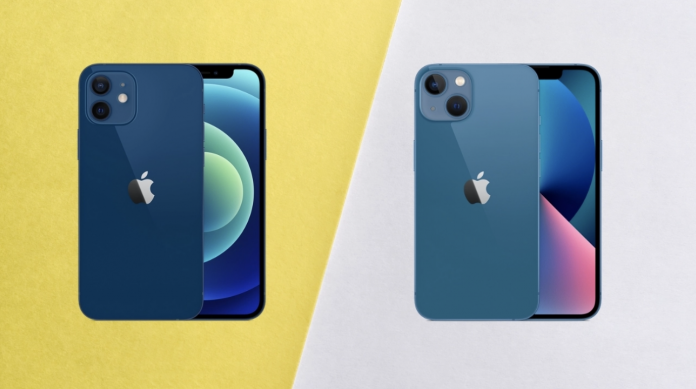 Here’s the iPhone 13 vs iPhone 12 comparison:

First, let’s talk about the designs of these two phones. The designs of the iPhone 13 and iPhone 12 duo, which are almost identical when viewed from the back, are similar in general. Although the thinner and angular edge design of the iPhone 12 series represents the iconic design of the 5S, it is possible to say that these two phones look similar in general terms. It is possible to say that there has been a significant change on the color side.

Both models come with the same screen size. The iPhone 13, which has a Super Retina XDR OLED display, has a 6.1-inch screen with a resolution of 1170 x 2532 pixels. In both models, the screen refresh rate is recorded as 60 Hz. Let’s point out that the 120 Hz display is only on the iPhone 13 Pro and iPhone 13 Pro Max models.

The iPhone 13 has a display technology called Ceramic Shield, which is also used in the iPhone 12. In this way, the screen, which is much more durable, can also protect itself against scratches or breakage.

It can be said that Ceramic Shield technology basically contributes to the durability of the front surface. This structure, which continues to the edges of the phone, does not leave any gaps on the phone and thus increases its protection. And thanks to all this, Apple says it’s getting four times better performance against drops with the iPhone 13.

It can be said that the iPhone 13 stands out with its improved night mode and cinematic mode. The dual camera setup on the iPhone 12 is continued crosswise with the iPhone 13. iPhone 12 has two cameras, ultra-wide and wide.

When we make a detailed camera comparison, we see the following: iPhone 13 has a 12 Megapixel wide OIS main camera with f / 1.6 aperture. In addition, the second camera is 12 Megapixel ultra-wide and has an f / 2.4 aperture. Likewise, the phone has 2x optical zoom and a new generation Smart HDR 4.

On the front cameras side, the iPhone 13 takes the lead with minor differences. While both devices have a 12 Megapixel TrueDepth camera with f / 2.2 aperture, the iPhone 13; It features Cinematic mode for photographic styles, Smart HDR 4, 4K @60 FPS video shooting with Dolby Vision, shallow depth of field video recording at 1080p @30 FPS.

iPhone 13 vs iPhone 12 comparison: Hardware and other features

The iPhone 13 is equipped with Apple’s A15 Bionic processor, while the iPhone 12 is equipped with the A14 Bionic processor, which was the most powerful Apple processor of last year. The iPhone 12, which came with 64/128 and 256 GB storage options last year, left its place to 128/256 and 512 GB storage options with the iPhone 13 this year. Both have support for wireless charging, and on the connectivity side, they both have Bluetooth 5.0 and Wi-Fi 6 802.11ax.

It should be said that the iPhone 13, which has 5G support, is the second Apple device to support this technology. Another common point of the iPhone 13 and 12 is that it charges with a Lightning cable, but this is not the only way to charge the iPhone 12. The new MagSafe accessories are supported by the iPhone 13 as well as the iPhone 12. For this reason, fast and wireless charging experience is offered on this side.