Apple announced its new line of smartphones last month, with the iPhone 12 Pro Max as the most advanced of the four, with the largest screen and main camera that holds the main available specifications manufactured by Apple.

In cameras, we have a main sensor of 12 MP f / 1.6 equivalent to 26mm that represents a uprade in relation to the previous generation, and still has optical stabilization based on the sensor, instead of the lens, and this set is accompanied by an ultrawide lens 12MP that equals 13mm and a telephoto also 12MP equivalent to 65mm. The set is crowned by a rare LiDAR sensor, which helps in calculating depth of field.

Considered the most advanced to date ever manufactured by Apple, the camera module of the iPhone 12 Pro Max has passed the famous DxOMark test. Was it enough to win the first place in the ranking?

The answer is no, but that does not mean that the analysts of the renowned ranking were disappointed with the device, on the contrary. The 130 points in total were considered impressive and sufficient to put Apple’s top of the line in fourth place, behind only rivals from Huawei and Xiaomi.

In sub-scores, the highlight is the 138 points obtained in the photos category, behind only the Huawei Mate 40 Pro. Here, praise for the precise exposure, especially in portraits, even in very low levels of light. The DxOMark also highlights the pleasant color indoors. Also noteworthy is the automatic focus, considered “particularly fast and precise”, which set a new record for this item. There are improvements in the texture and noise balance when compared to its predecessor. 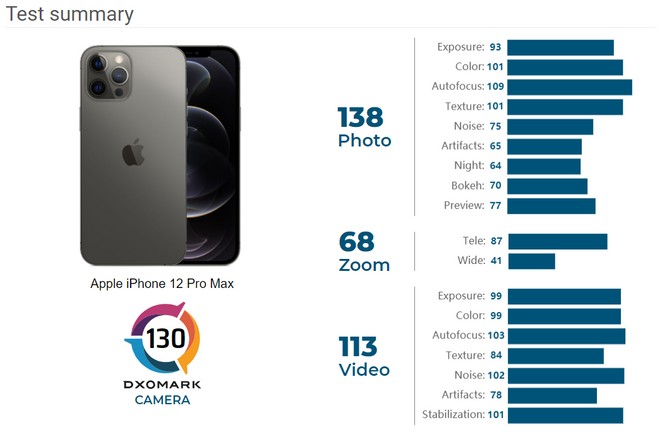 Analysts also mentioned the good work done by the LiDAR sensor, which offers good results, with good separation of objects and a natural-looking gradient blur and uniform noise, although artifacts on object lathes that are more difficult to detach are still visible. Speaking of artifacts, there is a small setback in this regard, which lost three points when compared to the iPhone 11 Pro Max.

In video, the iPhone 12 Pro Max also does a beautiful job, with 113 points, being tied with the Huawei P40 Pro, behind only the Mate 40 Pro. Here come features like support for Dolby Vision HDR, for example. In this module, praise goes to the good balance of texture and noise, in addition to the generally wide dynamic range. The speed and precision of the focus is another factor that deserves mention.

In conclusion, the only one however is the long zoom capability, which still lags behind competing models, but in general the cameras are seen as useful advances over the predecessor in almost every way, and the video performance is excellent, and one of the best ever.

Two New Champions Can Be Added to Apex Legends in Season...

Risk of tornado and flood after landing on Gulf Coast