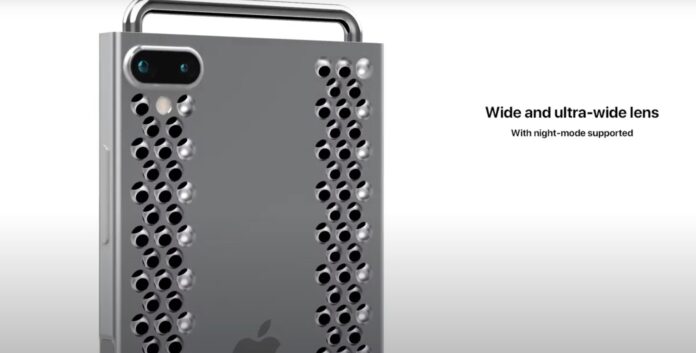 US technology giant Apple plans to introduce the new flagship series iPhone 12 in September this year, despite the COVID-19 epidemic that has damaged the supply chain. As you know, different concept studies are prepared by various designers before a new iPhone model is released.

To date, we have seen many design concepts for iPhone 12. While some of these are very close to reality, some of them are the product of a wide dream world. The iPhone 12 concept video, released this week by a YouTube channel called iPhone Industry, may be the craziest iPhone concept we’ve seen in a long time.

With an all-aluminum body, the iPhone 12 concept may be the craziest concept design we’ve seen in a long time
As you can easily notice, this extraordinary concept is inspired by the Mac Pro model Apple introduced in WWDC 2019 last year. Behind the concept called iPhone 12 XDR Pro, which consists of a completely aluminum body, we see ventilation holes that resemble cheese grater, just like Mac Pro.

The new iPhone 12 concept is inspired by Mac Pro, which stands out for its cheese-like design.
Many of the iPhone 12 concepts we’ve seen so far have been in line with reality, but the new concept, inspired by Mac Pro, will never find body, as you will appreciate. Anyway, the team behind the design must have signed such a concept to get the interesting design of Mac Pro.

While you are talking, you can visit our news here for all the details about the Mac Pro model Apple has developed with professionals in mind. Now let’s leave you alone with the concept video of the iPhone 12 XDR Pro without further ado.

Tesla cars are not used to spy on China