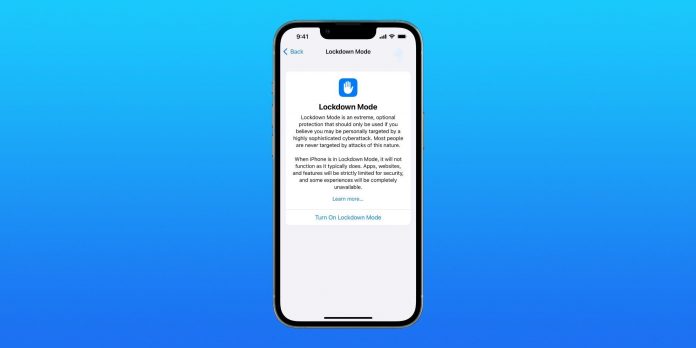 Apple is addressing the growing problem of mercenary spyware with a lockdown mode, which is a last resort that provides maximum security for people who fear they may be the target of a sophisticated cyberattack. The debut of this feature is scheduled for the end of this fall as part of the upcoming releases of the company’s software, which were first presented at the Worldwide Developers Conference in June. Apple continues to expand its software releases in the months between their announcement and the official release, which explains why the security mode was not disclosed earlier. Some changes are minor, while others are completely new features. The lockdown mode is not for the average user — so it wasn’t part of the preview — but it makes a big difference in the evolving state of global conflicts.

Global problems often penetrate the technology industry, causing both visible and invisible ripple effects. These mundane conflicts can affect both supply and demand, as well as research and development. After Russia’s invasion of Ukraine earlier this year, experts predicted that the shortage of microchips would increase as both countries export the materials needed to produce microchips. This is a very tangible way to see the impact of global conflicts on the technology industry, but others are not so obvious. When problems persist, companies can change their research and development priorities to fix the problem and find a solution. Privacy and security have always been priorities for Apple, but it is clear that ongoing cyber threats have prompted the company to take extreme measures to protect the most vulnerable individuals.

The blocking mode is not intended for an ordinary user who is annoyed by robot calls and spam texts. Instead, it is more suitable for government agents and corporate executives who may be targets of corporate or state-sponsored espionage. “Although the vast majority of users will never become victims of narrowly targeted cyber attacks, we will work tirelessly to protect the small number of users they threaten,” Ivan Krstic, head of security development and architecture, said in a press release. “This includes continuing to develop security tools specifically for these users, as well as supporting researchers and organizations around the world doing critical work to expose the mercenary companies that create these digital attacks.” The company singled out NSO Group, an Israeli technology firm known for its zero-click remote surveillance of smartphones, as the state-sponsored Lockdown Mode organization seeks to thwart.

How the lock mode protects the iPhone

Apple claims that the lockdown mode is an extreme measure that should only be taken by persons with a high risk of targeted cyber attacks, since this feature severely limits the capabilities of the device. When it is turned on, the smartphone does not work properly. Some complex websites are blocked by default if they are not exempt from blocking mode protection. FaceTime calls cannot reach the iPhone unless it has previously initiated a call to an incoming phone number with lock mode enabled, and most message carriers are blocked, except for images. Wired connections are also completely blocked when the iPhone is locked, and Mobile Device Management (MDM) services are not available on devices with lock mode.

The new regime comes at a time when cybersecurity risks for targeted individuals are at an all-time high. On July 6, the heads of the US FBI and the British MI5 held a joint platform for the first time, stating the threat of cyber attacks from other countries. “The Chinese government is determined to steal your technology — no matter what makes your industry work — and use it to undermine your business and dominate your market,” FBI Director Christopher Wray said in a speech, as reported by The Wall Street Journal. Both agencies view mercenary spyware as a terrible threat, which may explain the timing of Apple’s announcement. The lockdown mode is intended to be a solution for individuals who may become targets of corporate or government espionage, and will be released this fall along with iOS 16, iPadOS 16 and macOS Ventura.

Ellen DeGeneres reacted to the hospitalization of former Anna Heche after...