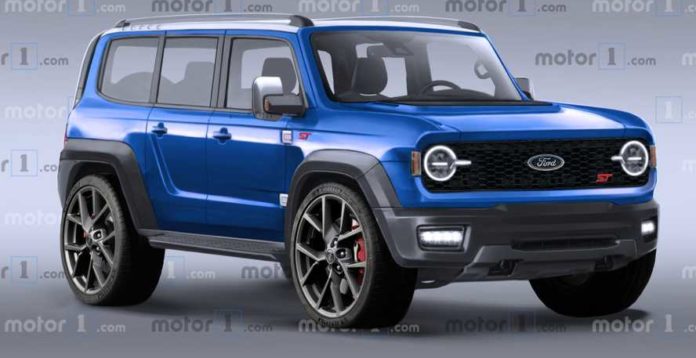 Ford’s Off-Road vehicle Bronco recently came up with its new version. The vehicle, which is reflected in spy cameras, is now in the hands of graphic designers and the ST version of this vehicle was created.

Ford, one of the most important names in the automobile industry, continues its operations despite the blows caused by the COVID-19 outbreak. Caught in spy cameras with the new Off-Road vehicle “Bronco”, the company could not escape the attention of car enthusiasts. Now the graphic designers have prepared the concept design of the city version of Ford’s new vehicle that they are about to announce and they have revealed how this vehicle might look.

Ford has never mentioned a version of Bronco that can appeal to all consumers. In fact, the company has not mentioned the new model Bronco to date. However, the images reflected in the spy cameras suggested that Ford will bring a more stylish Bronco this time and that the upcoming new Off-Road vehicle may also be suitable for use in cities. Of course, the last word will be said by Ford officials.

Camouflaged Ford Bronco caught in spy cameras
Ford produces ST version (Sport Trend) vehicles in its various models. Auto enthusiasts think that Ford Bronco may have an ST version, even though Ford has made no explanation about it. Graphic designers who set off with this idea think that Bronco ST might look like this if it is real;

Ford Bronco ST concept
Ford Bronco is an Off-Road vehicle and it is not possible to see this vehicle on the roads. Because this vehicle is mostly preferred by consumers who are interested in extreme motor sports. So Ford does not develop this vehicle for consumers who want to use an SUV model in cities. Also, the ST version means that Bronco can have a more powerful engine, and that’s not much.