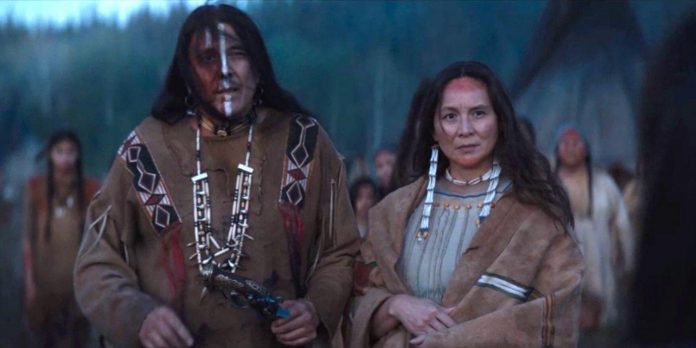 Long before they hunted Arnold Schwarzenegger and his crew, the Predators tried their hands at hunting on Earth in Prey. The film serves as a prequel to the original Predator movie and centers on a female Comanche warrior who must protect her tribe from the alien threat in the 1700s in the Great Plains.

Related: How The Predator Is Different In Prey To The Original Movie

Ahead of the film’s release, Screen Rant spoke exclusively with star Julian Black Antelope to discuss Prey, the original nature of his trimmed-down character, recent efforts at better Indigenous representation on screen, his role in Netflix’s Grendel series and more.

Screen Rant: Prey is quite the exciting film. I’m a big fan of the Predator franchise, so it’s exciting to see it go back to its roots. What about it for you really drew you to be a part of it?

Julian Black Antelope: At first, as you know with these types of projects, there’s so much that’s tight-lipped. There was no disclosure as to what the project even was, my agents just passed along some information and said, “They want you to read for this. But I have no idea what it is, if it’s a series or if it’s a movie or whatever it is – there’s very little information, period.” But once they found out what it was, I was super, super excited, because I have a personal attachment to the franchise that goes all the way back to the second Predator movie with Danny Glover.

It’s pretty cool to be a part of it, just overall. It was kind of surreal, I guess you could say. I know we shot more than what ended up in the film; a lot of things got trimmed and a couple storylines had to be bumped and so forth. I do hope fans eventually get to see those, perhaps in a director’s cut or something, but overall I was super over the moon.

Can you give me some insight into what hit the cutting room floor?

Julian Black Antelope: My character, Chief Kehetu had his own storyline, which involved another character named Wasape, played by Stormee Kipp. It was kind of like the changing of the guard, so to speak, my character was well on his way out the door, he was dying, crippled and needed to find a successor to pass the torch onto, and so his eyes were always on the males traditionally; never ever considered a female.

Rather than pull the focus from Amber Midthunder’s character, from Naru’s storyline, they chose to just focus everything on her. Which is totally understandable. But there was quite a bit of scenes that were cut back with Chief Kehetu that would be cool to see, but I still think everyone’s going to be super pumped for what they get to see.

What was it like developing the working chemistry with everybody on set during that production?

Julian Black Antelope: Oh, it was great. Amber’s super great to work with; Dakota, Stormee, Harlan, all those guys, all the core cast is who I interacted with. They’re all beautiful human beings. Some of them, like Dakota, it was his first role ever, I think he mentioned that, super down to Earth guy. Amber, too, is just a joy to work.

It’s funny, too, when you’re dealing with Indigenous talent, it doesn’t matter what level people are at, there’s always a commonality and connection in person. We all sort of share the same sense of humor. There’s just like an instant, unseen bond, a feeling of family, I guess you could say.

That’s always wonderful thing to hear come from a set. On that note, one thing I love about this film is it continues the trend of more nuanced depictions of Native cultures in film and TV, like with Reservation Dogs. What has that been like for you seeing that growth, so to speak?

Julian Black Antelope: It’s been actually such a breath of well-needed fresh air in the last while to see the industry actually taking painstaking lengths to make sure things are told accurately and making sure to get the right people to advise, making sure they are going to use the language, making sure that it’s spoken right, having language and cultural advisors on set. For Prey, Jhane Myers, she’s one of the primary producers on this unit, she also served as the Comanche cultural advisor, she’s Comanche and Blackfoot herself.

She was just awesome to be around and work with, very approachable, which is so refreshing to see somebody in her position, and very receptive and open to collaboration and ideas, which is something I’d kind of not heard of at this level of a movie. So it was really nice to see. And I think it was very inspirational for a lot of our young people that were on set, whether they were cast in acting roles, or whether they were just background performers just out for the day. I think it was very, very inspirational for them to see one of their own in a position like that, and to be so approachable, it works on so many levels. I think.

I’m glad to hear that those efforts were taken. One thing I’ve been curious about this Prey, too, is the Comanche-language dub. Was that done in post-production or was that done on the set with you and the cast?

Julian Black Antelope: For my character, I had some dialogue that was definitely in Comanche. I can’t speak for the rest of the cast, but I do know that there was supposed to be a full Comanche-language version of this. And that’s a first-ever, to my understanding, to have the Comanche language on a feature film all the way through. I know that’s something that they worked on; they shot stuff in English and then shot stuff in Comanche. I don’t want to speak out of school; I don’t know how the rest of it was.

I’m certainly looking forward to watching the Comanche cut. I think it’s such a fresh offering to have in any film, let alone a studio tentpole like this. How has it felt for you, seeing all the early very positive reactions coming out from screenings of the film so far?

Julian Black Antelope: I’m totally happy every time I read one of them, it’s so positive to see that it’s been well received. It’s really nice that people are so excited, as we are as Indigenous people. To see a young Indigenous lead, a female lead at that, in such a role, such a level of, as you said, a tentpole film, I think it has a lot to say, it’s very empowering for young women, and it’s well overdue.

I couldn’t agree more. In addition to Prey, you also have Grendel coming up, which is a pretty exciting property to finally be developed. How did that one catch your eye?

Julian Black Antelope: It blew me away, Matt Wagner’s comic has been around since I think the early ’80s, 1982-83, somewhere in there. It’s come out with so many different versions of Grendel, different iterations of it over the years, and it’s got this fan base that I wasn’t even aware existed.

I feel very blessed to be part of the project. That’s what I can say. I don’t want to talk too much about it, I don’t know what I’m allowed to say and what I’m not. [Chuckles]

I know that you’re supposed to play Argent, who is a really major character in Grendel’s story, especially in the early comics. What can you tell me about exploring that character through this series?

Julian Black Antelope: I can say that I play Detective Argent. Exploring that character through this series was a lot of things that resonated truthful to who I am as a person; as Julian Black Antelope. Just like the comic, he’s an honest guy, doing things for the right reasons in the realest sense.

For the character itself, they open themselves up to the cultural aspects of the character as well. If anyone’s familiar with the comic, they know Argent’s background.

Did that already wrap production?

Julian Black Antelope: Yeah, we shot between New York and Vancouver last year, I think from August till about the end of January. Yeah, that’s already wrapped, so it’s in post-production. I can’t speak towards the release date, I would say that it’s probably going to be sometime in the next year… I don’t know, that’s up to Netflix. [Chuckles]

What else can we look forward to seeing you in in the near future?

Julian Black Antelope: I just finished a series out east called Washington Black, it’s based on the book by Esi Edugyan. She was actually born and raised here in Calgary, Alberta, where I’m calling from. It’s another awesome show. I think it’s a family show, but yet it’s not a family show. It’s just a good story that’s well overdue to be seen on the screen.

Anyone that’s familiar with the books, they know it chronicles the tale of a young boy who escaped from slavery, is raised by another slave and then he escapes from slavery, and he falls under the tutelage of a scientist who teaches him how to read and write. He finds out that he has a knack for science himself and follows along his adventures.

Wow, that sounds like a really powerful story to be told.

Julian Black Antelope: It is, it is. It’s another one for Disney, actually, it’s quite a big project. That’ll be the next thing, I don’t play such a nice guy in that, though. [Laughs]

Set in the Comanche Nation 300 years ago, “Prey” is the story of a young woman, Naru, a fierce and highly skilled warrior. She has been raised in the shadow of some of the most legendary hunters who roam the Great Plains, so when danger threatens her camp, she sets out to protect her people. The prey she stalks, and ultimately confronts, turns out to be a highly evolved alien predator with a technically advanced arsenal, resulting in a vicious and terrifying showdown between the two adversaries.

Check out our SDCC 2022 interview with the cast and creatives of Prey, as well as our previous interview with director Dan Trachtenberg & producer Jhane Myers.