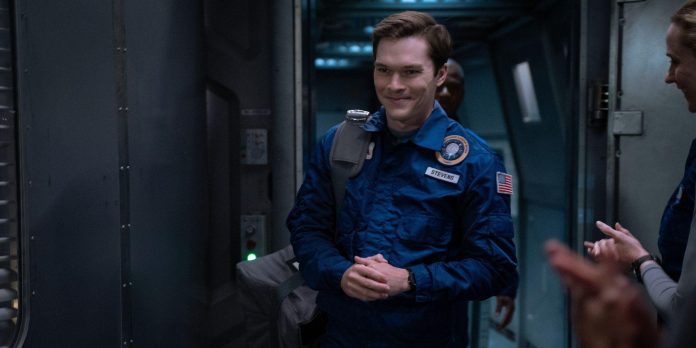 A decade after his parents Gordo and Tracy’s heroic death on the Moon, Casey W. Johnson’s Danny Stevens assumes a prominent role in For All Mankind season 3’s narrative, as he travels to Mars with Helios. The Apple TV+ sci-fi drama propels its alternate history into the heart of the 1990s as humanity races to land a human crew on the Red Planet with Dev Ayesa’s (Edi Gathegi) private enterprise competing with NASA and the Soviet space program.

In For All Mankind season 3’s premiere, Danny gets married at the Polaris space hotel, which nearly ends in disaster. Despite Danny’s heroics on his wedding night, he later gets into trouble with the police after a night out, calling his status with NASA into question. Danny officially books his ticket to Mars when Ed Baldwin (Joel Kinnaman) recruits him for Helios’ mission, though the young astronaut faces no shortage of personal obstacles in For All Mankind season 3. Along with his grief and feelings of inadequacy living in the shadow of his late parents, Danny deals with his lingering feelings for Karen (Shantel VanSanten), with whom he engaged in a brief romantic affair during season 2.

Johnson spoke with Screen Rant about Danny’s personal struggles in For All Mankind season 3 and what he hopes to see in the show’s future.

Screen Rant: You joined For All Mankind in season 2, and Danny spent all of his time on the ground. How did it feel to take on the role of an astronaut in season 3?

Casey W. Johnson: It was incredibly exciting to be able to step off the ground and go into space. [It was] super, super fun. I can’t express enough about how much fun and how much excitement was in me. It’s sort of like a dream come true. Especially as a young kid, not only do you dream of space but I dreamed of working on movies one day and here, both were combining at the same time. So, it was very, very fun.

Right from the start in episode 1, Danny heroically saves everyone during the space hotel disaster. Can you describe what you imagined going through Danny’s mind while all of this was unfolding and what motivates him to spring into action?

Casey W. Johnson: I think what’s going through his mind is everything’s happening so fast. It’s a whirlwind of just getting married and then, all of a sudden, realizing something’s wrong and realizing that you not only have to save yourself but save other people that you care deeply about. I think it’s just a spur-of-the-moment, “I have to do this. I’m ready to do this. I trained and prepared so much. Here we go. Let’s go.”

Casey W. Johnson: Yeah, I think the past definitely weighs on him quite a bit. Losing the most important people in your life at very pivotal moments, it’s just so hard to shake. Losing a best friend at such a young age, losing your parents at 19-20, it’s just extremely hard for him to shake. I think he’s tried so long to suppress these feelings, and continue, and put his head down and live up to his parents’ legacy and live up to the idea he has in his head of what’s possible and as a result, has maybe forgotten about his own happiness, and peace, and what he needs to deal with internally. And therefore, we see, externally, him making some mistakes.

One of the biggest developments of season 2 was Karen’s affair with Danny, and we see the remnants of that carry over into season 3. In your mind, why isn’t Danny able to let go of his feelings for Karen a decade later even when he’s married to someone else?

Casey W. Johnson: It’s a very tricky and complex situation, as we’ve all seen. But, I think it’s his first love and he’s a young boy trying to figure out who he is and what love is, what all of that is. Then, very closely, losing his parents at the same time and just not knowing what to do. In your mind, you can build up crazy theories of what’s possible, and I think maybe he just spent a little too much time in a world where he’s been ignoring the tough things that are happening as life. It’s a tricky thing to understand where he’s at and I don’t know if he fully understands it, himself.

Season 3 really emphasizes the legacies of the Baldwin and Stevens families. Kelly and Danny deal with that under different circumstances. In Danny’s case, how much does he feel like he’s living in his parents’ shadow?

Casey W. Johnson: Your parents being the most [known] astronauts and dying in a very heroic is not only a tragedy, but to be reminded of it over and over and over again isn’t very easy. I can only imagine it being incredibly difficult to know how to feel about everything. So, him wanting to live up to their legacy but also, in a way, wanting to move past it and find himself, and not let his tragedies define him as a person, yet him being reminded of it at every turn is very overwhelming.

I love all the tension between Ed and Danny during the Mars flight. Ed thinks of Danny as a son, but Danny resents that for a number of reasons. Also considering the trouble Danny gets into earlier in the season before the mission, how do his unresolved personal issues impact what goes on in space and on Mars later in the season?

Casey W. Johnson: All the unresolved issues are sort of unraveling and coming out. Ed is looking at him as a son in a way, and Danny has a lot of resentment, and sadness, and confusion. It’s not easy for him to look at Ed the same way and we start to see that pain and sadness can lead to some interesting things happening.

We hear some talk in season 3 about colonizing Mars and after that, the rest of the solar system. Where would you like to see For All Mankind’s story go in the future?

For All Mankind Season 3 Synopsis

In season three, the Red Planet becomes the new frontier in the Space Race not only for the US and the Soviet Union, but also an unexpected new entrant with a lot to prove and even more at stake. Our characters find themselves going head-to-head as their ambitions for Mars come into conflict and their loyalties are tested, creating a pressure cooker that builds to a climactic conclusion.

Check out our previous For All Mankind season 3 interview with showrunners Ben Nedivi & Matt Wolpert.

Grey’s Anatomy: What we suspected of the departure of Justin Chambers...