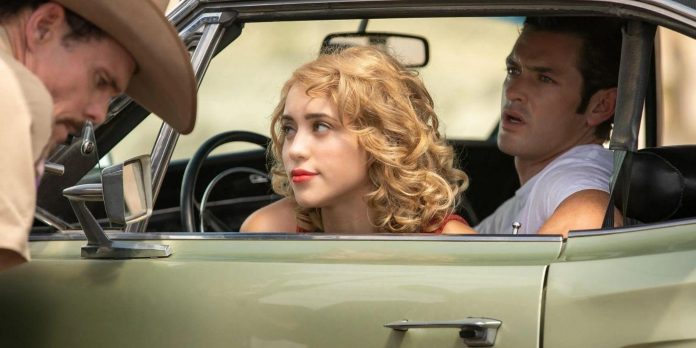 “I’ve been in the business for about 33 years. A lot of this wasn’t brand new, but the level of ownership is significantly different,” says Frank & Penelope director-writer Sean Patrick Flanery, best known for starring in The Boondock Saints and the television shows Dexter, The Young Indiana Jones Chronicles, and The Dead Zone. “There’s more weight on my shoulders. The bad feels worse, and the good feels better.”

The road thriller follows two star-crossed lovers, Frank (Billy Budinich) and Penelope (Caylee Cowan) as they travel across a desolate West Texas blacktop. Their crime spree leads them to becoming immersed in a hellish nightmare led by the psychotic cult leader Chisos (Johnathon Schaech). The situation becomes life or death as the Frank and Penelope fight for survival. In an exclusive interview, Game Rant spoke with Sean Patrick Flanery and Caylee Cowan about their favorite scenes to film, pulling together the scene-stealing cast, Sean’s cameo as a bar owner, and more.

Game Rant: The movie has many genre-bending elements. What were your favorite scenes to shoot?

Caylee Cowan: My favorite scene to shoot was the middle of the movie, on the blacktop. Which is odd because the blacktop was very hot, but I enjoyed working with Kevin Dillon. It was my first time working with everyone and I had a great experience.

Sean Patrick Flanery: Our first day was one of the heaviest scenes in the entire film. That was my favorite day, it was where a majority of the heavy lifting came in. When I saw them [the cast] absolutely destroy those scenes, it was amazing to see. Somebody far wiser than me said, “if you cast it correctly, you can pretty much just sit back and say, ‘go and stop.'” That’s essentially what I did. I had a great time on the film. But after that first day, it was very relaxing.

GR: What was it like creating chemistry with the cast?

Cowan: It was easy. The chemistry was instantly there. With everyone on the cast and crew, it feels like a family now. It was my first time working with everyone, and now we have a tight bond because of making this movie.

Flanery: That’s a very humble explanation. But I’ll give you a little glimpse of the wizard behind the curtain. I’ve been on the other side of the camera for a very long time. When a team of producers get together and they’re casting a love story, they look at the images, interview the people, and come to a consensus. They say, “most likely it looks like this boy and this girl would have incredible chemistry.” Then you take them out of their hometown and you put them in a hotel isolated, and you stand a pretty good chance of the being chemistry there.

They [Caylee Cowan and Billy Budinich] look like they go together. They have warm, outgoing personalities. They complement each other on paper, and they complemented each other in the real world. Sure enough, I think what you see on screen is backed by reality. I know Billy finds Caylee incredibly appealing, and I would assume that Caylee looks at Billy and goes, “He’s a good dude, top to bottom.” I’m happy with what we got on film but it’s not always completely make believe.

GR: Continuing this casting conversation, who was the most difficult character to cast?

Flanery: Obviously, without question, it has to be your title character. Realistically, I wanted something very different. I wanted Penelope to be angelic, like an Audrey Hepburn, but with an almost dangerous and violent sexuality of a Marilyn Monroe. I wanted Frank to have the cerebral quality of a Montgomery Clift, but the mysterious emotional aspect of a James Dean. I am so blessed because people are going to think that I introduced them to the world when really they did all this on their own. They slayed these two roles. They did it on their own.

GR: Talk to me about connecting to the character Penelope. What are some aspects that you admire about her? What did you find to be challenging to portray?

Cowan: Well, Sean did an incredible job writing the script. It was a great gift to have the person who wrote and worked on the script to also be the director and to act with him. That was a really great experience. Anytime I had a question, I would go to Sean and I would ask him, “So why did you write this? What is the significance of this line?” And he would have informed answers.

I admire that she’s this character who’s had a hard life. She wasn’t really born into the most ideal circumstances, and she has done everything she can to survive. She uses the assets that she has available to her for survival, and one of those is her sexuality, which is like a double-edged sword. Sometimes it works against her, and sometimes it’s her way of literally surviving. Her grit, determination, and perseverance are all qualities that are very admirable. And also her loyalty. She’s the definition of a ride-or-die.

GR: Sean, how did your cameo has the club manager come together? Was it planned?

Flanery: No, it wasn’t. Truth be told, I had no intention of playing [the club manager] at all. Having said that, at the end of the day, I’m also a businessman. It’s a small role and we sought out everybody that was available and at the end of the day, it was bookended. We needed them one day in the beginning and then at the end of the month, and it’s hard to find anybody with that availability. So I stepped in and did it, and it’s a horrible character to have to bring to light.

Cowan: That character is not a very likable character. When I read the script, I knew it wasn’t a role that people would be jumping for the opportunity to play. He’s the villain, so I think for Sean to jump in and do that is a testament of who he is. I had already been filming with him for months and knew what kind of person Sean was, so I felt very safe filming with him.

GR: What do you hope is next for this story? Do you see yourself revisiting these characters?

Flanery: Ultimately, I hope people find this film because Caylee’s a burgeoning talent that will get snatched up pretty quickly if eyes get on this film. I think there’s a huge void for an actress like Caylee and an actor like Billy, so I hope it’s a gem that gets washed up on a beach somewhere.

Cowan: I mean, cinema after COVID was completely altered. I’m really hoping for a new resurgence in cinema, and that we’ll find ways to make going to the movies fun again. If Sean or anyone that I’ve worked with on this film ever reached out to me and was like, “I want to do something again,” I would pick it up in a heartbeat because they are like family to me.

Frank & Penelope will be released on streaming and VOD on July 12.

Alexis Neyers files for divorce from Evan Haynes after 10 years:...