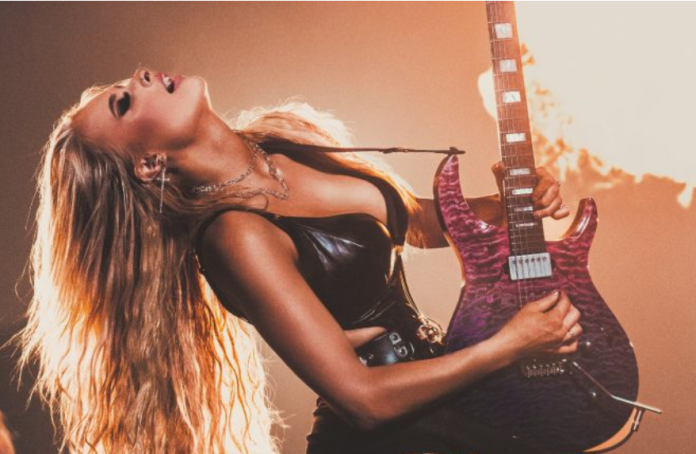 Internet sensation and live guitarist of Machine Gun Kelly Sophie Lloyd has released her new solo single “Do Or Die“. Check it out below along with our interview with Lloyd.

“Do Or Die” is the first “big” release by guitarist Sophie Lloyd, taken from her upcoming debut album “Imposter Syndrome”, inspired by Slash.

Lloyd first made a name for herself on YouTube with a series of guitar covers of rock and pop classics, and previously released the instrumental EP Delusions in 2018.

“Do Or Die” is inspired by Iron Maiden and features vocals by Nathan James of the hard rock band Inglorous. “He’s just a fucking powerhouse. The track also has some really cool riffs and a cool guitar solo. It’s just an amazing song,” Lloyd continued.

Speaking about what to expect from her debut album “Imposter Syndrome”, which is due to be released next year, Lloyd said: “The whole record is inspired by Slash’s solo album of the same name, where he collaborated with different people from different musical fields. . I’ve also worked with a bunch of different artists on my album.”

Lloyd’s includes Nathan James along with Atreyu vocalist Brandon Saller, Matt Heafy of Trivium and Michael Star of Steel Panther, as well as “some new artists who blew themselves up on TikTok.”

She keeps the rest a secret, although Lloyd teased one fulfilled collaboration with someone from the best on her wish list.

“The album touches on a lot of different genres, but all within the rock sphere,” Lloyd said. “There’s an energetic pop-punk song, a few heavy metal tracks and a bit of country rock. Everything does not fit in one box, which I am very happy about. This is all the music I listened to as a child. I feel like this album was largely written for me as a 15-year-old who was just sitting in her bedroom listening to music.”

Speaking about why it’s now for the debut album, Lloyd said: “Writing music has always been my first love, even if most people know me from YouTube. It just seems like the right time to assert myself and what I want to do.

“I’ve always been pretty open about my struggle with pre—performance anxiety and imposter syndrome,” Lloyd continued, explaining the album’s title. “I definitely didn’t follow the usual path that most musicians follow. I uploaded videos to the Internet instead of playing live in pubs, and it always seemed to me that I wasn’t good enough because of that. I started to worry, and it was holding me back. I’ve been working on these things on this album.”

Working on it remotely during the COVID pandemic with several different collaborators, Lloyd discovered that other artists had similar problems. “It’s such a common thing on the rock scene, but it’s never discussed,” she said. “It’s good to try to raise awareness.”

Lloyd also overcame her concerns about her own abilities by going on tour with Machine Gun Kelly as part of his live band as part of his massive “Mainstream Sellout” world tour.

“It was such a journey,” she said. “There is always something to work on, but playing on these big stages, I realized that this is where I need to be. I feel so confident in myself and in my music.”

She continued, “MGK literally wrote to me on Instagram one day after seeing some of my videos. We Facetime chatted, it seemed like we were doing well, and before I realized it, I got a visa and flew from London to Los Angeles for rehearsals.”

She was “completely new to the world of touring,” so there were several obvious fears of saying yes. “I felt like I had to prove something to myself,” she explained. “It was also a chance to prove to everyone else that I’m not just a guitar player on social media.”

According to Lloyd, she now has “almost more” people rejecting her abilities as a musician. “If people want to think I’m just a guitar player in the bedroom or something, that’s their problem,” she added.

Lloyd added: “The tour with Machine Gun Kelly was amazing. It was like one big family and I felt so comfortable and safe from the very beginning. I also like the way he uses his music to tell a story and convey a message.”

Playing in stadiums also changed Lloyd’s own ambitions. She said: “I’ve always said that I never wanted to be a touring musician because I’m such a domestic bird,” the musician admitted, “but seeing that people have such experience in the music you play, and not just seeing numbers on the screen, it’s just amazing.

“I definitely want to tour with my album next year. I am very happy to be able to visit the real world a little more, and not just be on the screen. I want to inspire more people to pick up the guitar, especially women. I want to show people that rock music is damn cool.”

Sophie Lloyd’s “Do Or Die” is already on sale. Her debut album “Imposter Syndrome” is due out in 2023.

What does canceling Batgirl mean for Snyderverse