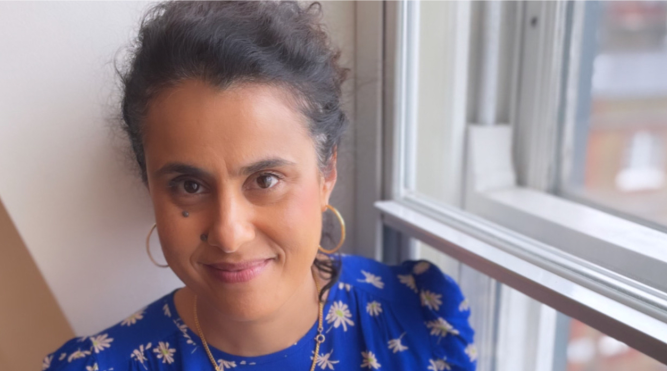 Welcome to the International Disruptors section of Deadline, in which we highlight key executives and companies outside the United States that have stirred up the offshore market. This week we’re talking to Surian Fletcher-Jones of Working Title Television, the executive producer responsible for bringing films like Nida Manzoor’s “We Are Lady Parts” and Dolly Alderton’s “Everything I Know About Love” to small screens.

Surian Fletcher-Jones has spent the last two decades of her career struggling to bring important and diverse voices from the periphery into the spotlight, and now, after her latest efforts on working-class television, it seems that the needle is finally moving in the right direction. direction.

The respected executive producer and head of drama at Working Title TV, which is part of Universal International Studios, went crazy a few years ago thanks to the resounding success of the female Muslim punk rock series We Are Lady Parts for Peacock and Channel 4 and the BBC drama “Everything I Know about Love” by Dolly Alderton. The first, created by Nida Manzoor, was awarded three Bafta television awards this year, and the second, based on the personal experience of the British writer and journalist Alderton when she was in her twenties, was first presented this summer and received rave reviews.

“I’m obsessed with women’s voices, diversity of voices, counterculture and alternative culture,” Fletcher-Jones tells Deadline from her London office. “I feel that my mission in life and in my career is to find a wide audience for these voices, and not just dabble on the periphery.”

But it took a long time, admits the former chief executive of Channel 4 and Scott Free. “It took me 20 years to do a show with someone of the same color as me, and there still aren’t enough stories like that-we need more.”

Fletcher-Jones, who started her career in theater and then moved to television, has always sought to discover and develop new and emerging authors and writers who tell stories from a point of view that is not usually accepted. “I have always believed since I started working in the theater that stories can change the world. I really, sincerely and deeply believe in it.”

From the very beginning of her career, she has championed eclectic stories from writers of all backgrounds and directed scripted productions such as the historical drama Indian Summer and the LGBT program Banana and Cucumber for Channel 4. “It’s in my upbringing to advocate for different voices,” she says. . “It’s just in my DNA.”

Now, after more than six years working on a banner with the working title of Tim Bevan and Eric Fellner, she says she has finally found a place where she could combine her passion for protecting new and unique voices and help bring them to the global stage. “This marriage — this meeting in the middle — really excites me,” she says.

We Are Lady Parts is perhaps one of the best examples of such a marriage, which Fletcher-Jones speaks about. Manzoor has been in her field of vision since she worked at Channel 4, when many years ago the writer came to a training program at a commercial broadcaster.

“We watched each other for a long time,” recalls Fletcher-Jones. “And what I like about Nida is that she always knew who she was. She always had a sense of “her own”, which was a really stupid comedy with a dash of action. I think for a while people tried to brand her with things, saying, “Oh, you’re a Muslim, so you should write about honor killings and things like that.”

When Manzoor came to Fletcher-Jones with the idea of the series, inspired by the writer’s experience gained from rich and diverse cultural collectives and artists in London, she says that Manzoor was “put out of action by other producers.”

“She came to me because she knew I didn’t think she needed to be classified that way,” Fletcher—Jones says. “We were attracted to her more hackneyed comedic side.”

Admittedly, the executive director says, she raised her head above the parapet to lift We Are Lady Parts off the ground. The story follows the Muslim punk band of the same name, which includes defiant doctoral student and lead guitarist Amina Hussein and fierce mysterious frontwoman Saira. “No one wanted this show, no one asked for this show—that was what I wanted to do,” she says.

Even when she called agents to find out who would join the cast, Fletcher-Jones recalls that “there was almost no one around.” However, today she notes that the personnel reserve is gradually becoming more diverse, but “there is still a lot of work to be done.”

The series We Are Lady Parts, which Peacock and Channel 4 renewed for a second season, earlier this year won three BAFTA awards: PC Williams for costume design, Aisha Bywaters for script casting and Manzoor for screenwriter.

“One of the things I’m most proud of about this series is that we championed women of color to department heads in various positions in production,” she says. “At the Baftas, it was one of the proudest moments of my life when I saw these three brown and black women there. It was phenomenal.”

For Fletcher-Jones, it is paramount that the working title of TV is part of the “cultural discussions” in the UK and abroad. Although she speaks fondly of her time spent in broadcasting —”everyone is at the top of their game, and God, this industry is just teeming with smart people”—she admits that leaving this world for one that is “More about following your nose.”

“I just discovered that being a producer here and being able to do my own thing in this huge community is really liberating,” she says, adding that the emergence of streamers has opened up a lot of opportunities for young and diverse voices.

She says: “If it wasn’t for the streamers, I really don’t think I would still be in the industry — it feels like the floodgates have just opened for everyone and you can do something more transgressive and more challenging.”

She is keen to stress that when it comes to the diversity of stories, it is crucial that the female voice is not left out of the conversation, pointing to voices such as Alderton’s “In My Skin” and Kayleigh Llewellyn as examples of some “interesting work coming from a white female voice.”

“I feel like women are kind of being left behind in the diversity conversation,” she says. “It’s important that we have a lot of different voices, and I feel like we still have a way to do that.”

She speaks fondly about working with writer and podcaster Alderton on the film “All I Know about Love.” The much-publicized seven-part film, starring Emma Appleton and Bel Pauli from The Witcher, is based on Alderton’s memoir: “[Dolly] has worked in a variety of environments, and therefore she is incredibly savvy at storytelling.”

Fletcher-Jones adds: “She also has a great understanding of people, cultures, ideas and how the world works. She has so much humanity, so much time and compassion for people, and this natural empathy permeates her work.”

Admittedly, when it comes to looking after new and young voices on screen, the CEO says it’s hard not to feel protected by these talents while helping them realize their vision. “You are here to support this person, but you are also here to protect this vision and not let other people change its shape.”

Moving forward, Fletcher-Jones is inspired and inspired by the rich palette of screenwriting and directing talents on offer in the British space. She meets playwright Inua Ellams and Cherish Shirley, who co-wrote the episode “All I Know about Love,” as two key talents she hopes to work with.

“As for Inua, we need to hear his voice because he could write a landmark show about the migrant experience,” she says of the British—Nigerian poet and playwright. “The movement of people is the biggest theme of our time, and his works are full of vitality and humor. It’s cool, and he has a heart—I’d really like to bring his work to the screen.”

The executive director also says she is working with Alissa Ann Zhong Yi, a mixed-race Chinese writer, actress and drag queen who is “composing something autobiographical for us.”

“I really encourage them to find the right medium for their voice so that they can work on the main stage or on a larger scale than perhaps they are used to or hoped to do in the past,” she says. “It’s about an alliance between an alternative and an author’s sole voice and commercial sensibility, and if you can understand this alliance correctly, it’s really special.”