Home Celebrity ‘INTERLUDE: SHADOW’ AND ITS CONNECTIONS WITH OTHER BTS VIDEOS 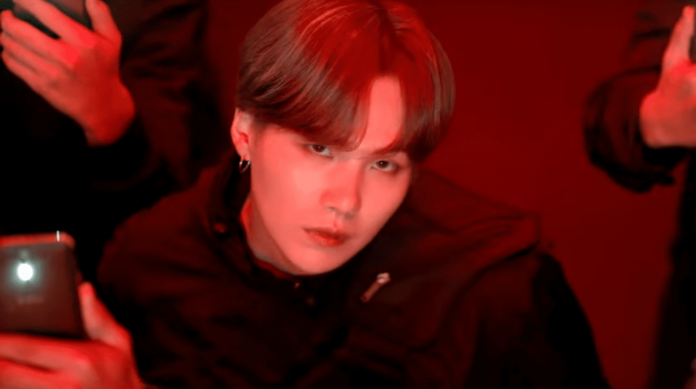 Without a doubt, ‘Interlude: Shadow’ has become the main theme of today. Thanks to the launch of the BTS comeback trailer, the idols managed to position themselves in the worldwide trends of Twitter. Along with the premiere of this video and the new era of BTS, there was a huge debate about what this MV could mean.

In addition to the dark meaning of the intro of ‘Map Of The Soul: 7’, ‘Interlude: Shadow’ has attracted the attention of the fandom for containing hidden messages and that are closely related to other videos that BTS has released throughout its career . We invite you to know the MVs that have secret connections with this new release.

FIRE
‘Fire’ is one of the videos that has been most related to ‘Interlude Shadow’. On the way to the end of the new MV of BTS, we can see Suga shaking her hand with one of the black people who chase him all the time. This scene is very familiar since, as you can remember, in ‘Fire’ Suga does the same action. In both scenes, a very similar crown appears in the background.

ENTER: PERSON
The introduction of the latest BTS album, ‘Map of the Soul: Persona’, which was in charge of Namjoon, makes a perfect contrast to the lyrics of ‘Interlude: Shadow’. In ‘Intro: Persona’, RM says “I just want to fly” and “Who the hell am I?”; Meanwhile, Suga expresses “Do not let me fly” and “You are me, I am you, now you know” in ‘Interlude: Shadow’. What other questions will Yoongi answer to the BTS leader?

FAKE LOVE
This theory has shocked several fans. In ‘Interlude: Shadow’, we can see how a group of people dressed in black try to tear down a door and constantly push it. Meanwhile, in ‘Fake Love’ J-Hope is leaning on a door that is being pushed sharply while making gestures of suffering. This has led the ARMY to theorize that perhaps Hobi is next and ‘EGO’ is in charge of him. How will this story continue?

EVERYONE, HOBI IS NEXT!!!!! pic.twitter.com/5gUQhQ4UTu

RUN
Yoongi stars in two scenes reversed in these two videos. In ‘Interlude: Shadow’, Suga appears in the background while a mirror seems to be rebuilding. In the past, the idol broke a mirror in ‘Run’. What do you think this means?

Margot Robbie recalls how the Barbie photos that blew up the...