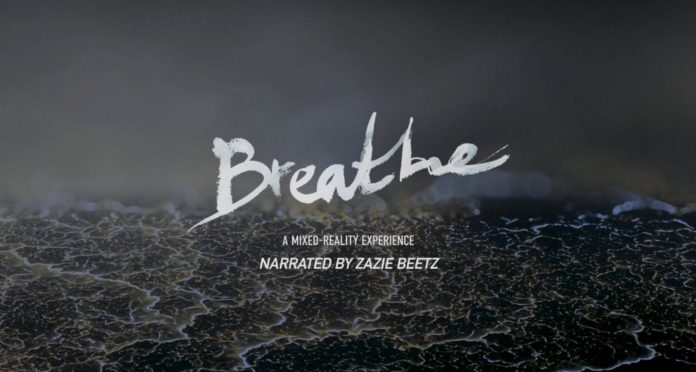 Sundance is hosting a very interesting project this year. The project, which is pre-promoted at the festival and called Breathe, promises a different experience to its audience with the Magic Leap Augmented Reality helmet.

Have you thought about how the breath you breathe affects the world around you? Even if you haven’t thought of it, someone thought and made it a project. Zazie Beetz was the voice of Breathe, who made his Premier at Sundance.

The Magic Leap AR (Augmented Reality) head with a breath detection sensor attached is required to experience Breathe. According to the statement made by Breathe’s director Diego Galafassi, Breathe is the first project where biometric sensors are attached to Magic Leap. In an interview with Edgadget, Galafassi says that this project idea first came to mind in 2018.

The birth of Breathe
Galafassi, who said that this idea came to his mind after an interview with an anthropologist, said, “We were talking about the atmosphere and the air that allowed us to renew this relationship. We are constantly breathing, but very rarely we stop and think about it or perceive our breath. ”

The project also provides information about the environment, such as the air quality of the city you are in, to its viewers. So everyone in different cities and countries will have experienced Breathe slightly different than others.

“The project is about using power, trying new media possibilities and augmented reality technologies to establish a different relationship with the natural world and see how we are connected to this huge planetary system,” says Galafassi.

See Also  According to Researchers, Half of the World Is Still Intact

Breathe will be able to be experienced in Montreal, Canada a few months after it was shown at the Sundance Film Festival. The Galafass; He also stated that his team has been communicating with different institutes in Europe and the USA in order for this experience to be experienced by more people.

Crypto Michael: Volatility After $ 10,200 in Bitcoin

Here is Apple’s last move against the Corona virus!

NASA Closes Spitzer Space Telescope That Changed Our View Of The...